As you have heard—because by God the media are all beside themselves on this—a county clerk in Kentucky named Kim Davis refused to issue marriage licenses to same-sex couples (which is legal in Kentucky). She was jailed for contempt of court, since she refused to do her elected job. As an elected official, of course, she swore an oath before a judge to obey the law.

The media seem overtly celebratory about this, despite her being a Democrat, and even seem to be a bit shocked to find conservatives by and large agreeing with them. You can be opposed to same-sex marriage on a personal level, but if your job requires you do issue licenses, you do so. A convenience store clerk can be against smoking, but she isn’t going to deny cigarette sales to legitimate customers. The Czar opposes drunk driving, but if he worked at a tavern, he wouldn’t deny customers booze. And so on.

Ms. Davis has four choices: she can comply with the law, she can resign her position, she can challenge this, or she can defer the responsibility to underlings. No problem. But she cannot hold the position and refuse to do her job, even on religious grounds.

Okay, wait—how come it’s okay for her to go to jail over this, Czar, but you’re against a baker being forced to bake a cake for a gay wedding? The difference isn’t in the person holding the religious belief, but in the person requesting the service. A gay couple could easily go to a different baker and swear off ever doing business with the first baker ever again. That’s customer choice: and who the hell would want to eat anything that someone was forced to bake for you? In the case of the county clerk, her customers have no other place to go. As residents of that county, they have every right to request a license from that county. There’s no functional alternative besides trying to get an out-of-county residency exemption.

So once again, what were her options?

First, she could have complied with the law. She opted not to do so, and her family has said that capitulation is surrender. This is a tricky one, but she could have continued to oppose same-sex marriage while maybe voting Republican in the next election.

Or, she could have resigned. Her family again stated that this is the worst form of capitulation. Um, no: thousands of people have resigned in protest for more important jobs. One supposes if you’re elected into government, you’re probably not good at anything else, but Czar does not level any such charge against Ms. Davis. But if you think sitting in a jail cell paying daily fines is a good way to prove you won, versus a public resignation and declaring yourself a candidate for a different job, well, whatever.

Third, she could challenge this. But her options are limited: the Supreme Court has ruled against her, and she’d need to find a new argument to bring to the courts. It’s not that difficult—the Court would love a good religious freedom fight—but it would be time-consuming and expensive. If Ms. Davis has an attorney, she hasn’t been getting good advice.

Finally, she could have deferred this role to others in her organization. Maybe her name is still on the license as a clerk, but someone else could have executed it. When the Czar got married, he certainly didn’t have the actual clerk stamp anything; it was an under-assistant sub-deputy person who did the license. That gives her an out—she can oppose the decision while the job still gets done. However, she not only refused to defer this, she instructed her deputies not to do this, either. Bad call.

But there were two other mistakes made in this process that the Czar wonders if you caught. 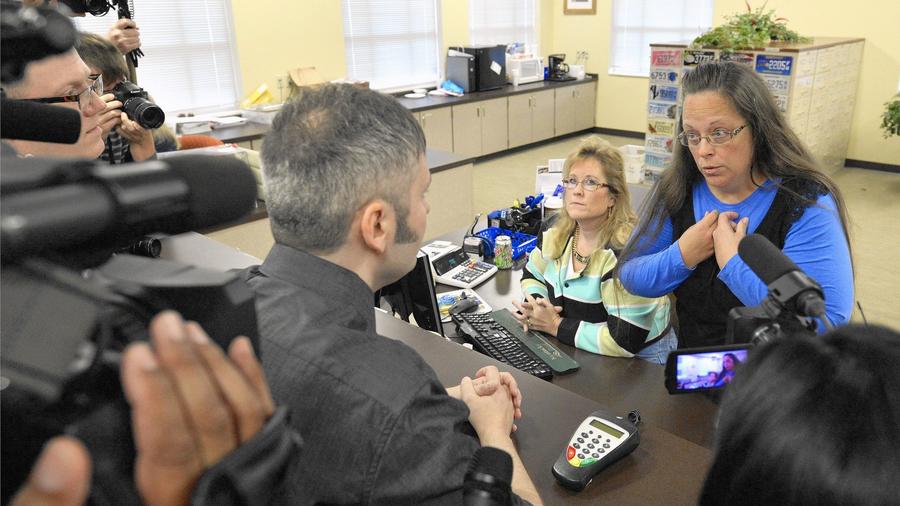 Ms. Davis conducts her one-woman show while county customers are unable to approach the desk due to the massive media presence. Does this look responsible, or megalomaniacal? Photo by Timothy D. Easley / AP

First, there was Ms. Davis, who effectively held press conferences right in the clerk’s office. Dozens of reporters jammed into the space, asking her questions and following up with confirmations. The entire time she stood there, responding. A professional would have asked them to leave to threaten them with interfering with county business. Instead, she ate the whole thing up, lecturing and opining for her worldwide audience. This doesn’t sound like someone who really took the job to get county business done, but someone who wants to be the center of attention.

So bad on Ms. Davis. You aren’t fooling the Czar. The office of County Clerk does not exist as your plaything. It isn’t your stage. Get a blog, or even something less pathetic than that.

Also, bad call for the judge’s office who stated that she will stay in jail until she changes her mind. Bad call. Really bad phrasing, right out of the old Soviet Union hooliganism sentencing guidelines. The judge’s office could have stated that “Ms. Davis will remain in jail, in contempt of court, until she obeys the order of the court to issue licenses.” That’s a behavior that can be measured; leaving her in jail until she changes her mind? Well, that’s a thought-crime, and the Czar is terribly uncomfortable with that.

When a judge’s office issues a comment to the press like they did, the judge is the one using an official position to soapbox a personal opinion. Change her mind, how exactly? By embracing liberalism? By being a good leftist? Probably not at all what the judge meant, but the poor phrasing allows those to be legitimate interpretations.

Man, the Czar would be in jail for life for the things he thinks about current events.

Let us hope that Ms. Davis will see her personal reality show cancelled, and we won’t have to hear anything further from either Ms. Davis or Judge Bunning.