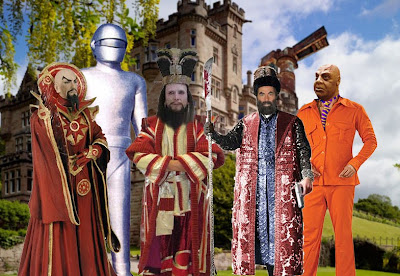 (from left to right, the Mandarin, GorTechie, the Œcumenical Volgi (id est, 孔夫子, The Notorious ŒV), the Czar of Muscovy, and Ghettoputer Gormogon. Taking the photo, and not in the picture, is Sleestak (one of the few things the idiot did right, although ‘Puter beat him mercilessly anyway); the house assistant Dat Ho is inside manning the Mandarin’s superlaser on the top of the castle. Click to enlarge.)

A short list of items each of us is thankful for:

The Mandarin is thankful for weather control, proto-dimensional quantal variance, marmosets (the cute little bastards), his new Robinson Armament XCR carbine in 7.62mm (not sure why he needs three of them), and Arizona Green Tea.

GorT is thankful for Ubuntu v295.2 (which now supports Flash), Macintosh System 6, the hidden joke within Stonehenge (you had to be there when they built it to get it), ripping open human skulls to check the patch version, foxy boxing, do-it-yourself thermite, and in-ground swimming pools.

Volgi is thankful for vampires, winning the first round of his sorcery battle although there is still so much to do, the Barrett M82A1 he has in his minivan, his pet yeti, havarti cheese, and his lockpick set.

The Czar is thankful for giraffes, the elimination of the pesky Etruscans, the Springfield XD-40, heights, blackbody radiation, and the forgiveness of Dat Ho for some of the many terrible things the Czar said to him last Thursday. And bourbon. Which we drank a lot of last Thursday.

‘Puter is thankful for peppermint Oreos, the 20% off all items at the Liquor Locker, his mouse guns which easily fit in most leisure suit pockets, Sleestak keeping his goddamn mitts off his stuff, the ongoing collapse of unions in this country, piranhas, anti-socialism, and the whole Andre the Giant meme. Although ‘Puter will likely forget about that by Saturday.

We hope your Thanksgiving is indeed wonderful, and remind you to give real thanks for all the good things you have received, all the bad things your family did not experience, and all the great things that were not yet taken away.