↓
Home→Gormogonica→Behold the Bride of ’Puter 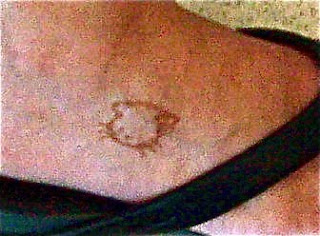 Gormogons friendly D.F. (who previously was bright enough to discern our occult rôle in the overthrow of Ferdinand Marcos) writes in:

O Great and Notorious Volgi, [not an official title, but the ŒV approves]

Hello Kitty has found a way into my life again. My sister-in-law is currently sporting a temporary henna tattoo of said Kitty on her foot as detailed in the attached photograph.

I had thought all the Gormogons happily wedded, but indeed if this is one of you secretly plying my recently made single sister-in-law, I approve the match.

Well, technically, GorT may have already made it happen, but all that time-travel-paradox crap makes Confucius’s* head hurt.

And we’re glad you approve of the match, D.F., but I have some news for you. The Harō Kiti is the mark Ghettoputer leaves on all his women. Kind of like the Phantom with his skull ring, ’Puter’s got a, well, thing, with HK on it. And you’re right, the ’Puter is already happily married. But the Amish Stallion has got some bizarre interpretation of the book of Habakkuk that he thinks conclusively establishes God’s approval of polygyny—though, n.b., only for him.

It seems your sister-in-law is either an intended of the ’Puter (kind of like the first couple bites of a vampire) or she has already joined his harem. It may be that she‘s concealing the fact from you deliberately or, as is sometimes rumored, the consummation was unmemorable enough that she’s literally forgotten the whole thing. These things happen.

Mazel tov to the newlyweds, and if it turns out she’s opposed to the idea, we’ll provide the annulment forms. We’ve got a stack a foot high here…