↓
Home→Uncategorized→Who Was the Last Republican President The Media Respected? 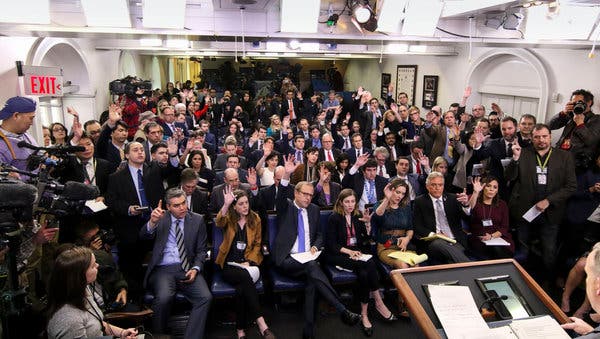 Photo used without permission, but taken by Doug Mills, The New York Times

Not that President Trump needs to be reminded that he sometimes says dopey stuff, but the news media suffers from a form of priapism where he is concerned, turning every news story into a rant about him, or linking every other world event big or small to a goofy tweet of his.

This isn’t a new thing. One of the advantages of having been born in the mid-13th Century is that the Czar has been able to track news stories all the way back to America’s founding, and the reader will not be reminded that the media did their best to bury, deny, or obscure anything damaging to the President’s predecessor, or rewrote, rephrased, reframed, or distorted his faults into something positive.

Nor will you require an explanation that the media hates hates hates Republicans but obsesses over the perfection of their Democratic opponents in every conceivable way. Picture a high school freshman running the yearbook committee, and that’s your media to a tee.

Who was the last Republican president for whom the media gave any respect?

Certainly not George W. Bush. He was consistently portrayed as a moron who defied imagination, as a worthless theocrat who connived a stultifyingly transparent plan to invade a peaceful country to cover up his lust to seize oil.

Nor George H. W. Bush, that doddering old fool who couldn’t grasp how a grocery store scanner works, and who messed up the economy so bad that only a brilliant technology visionary like Bill Clinton could set it right. Dana Carvey made a small fortune ripping on the guy—until he actually met him in person, and developed such an admiration for the man that he stopped doing his impressions for him outside of a quick quip or to do his voice in an anecdote about their meeting.

Remember Ronald Reagan‘s treatment? A senile catnapper who was so disoriented that he was certain to launch World War III by his forehead hitting the button on his desk when he passed out. This was a guy who listened to his wife’s astrologer and spent his few waking hours noshing on jelly beans—when he wasn’t masterminding a complex arms-for-hostages deal.

Gerald R. Ford was so inept that he couldn’t do math, fell down constantly, and obsessed about college football. He was so dumb that he once locked himself out of the White House taking the dog out for a crap. Plus, he pardoned Richard Nixon of all people, which shows you what a total idiot he was.

We only have to mention Richard M. Nixon. Anyone who’s heard of him can list his weaknesses: his paranoia, his sociopathy, his corruption, his inability to relate to normal humans without an embarrassing gaffe, and his Machiavellian plotting. Curiously, one of his biggest weaknesses (the Czar believes) was his inability to realize the media would hate him unequivocally. Nixon spent too much time trying to win them over, charm them, throw them bones, and try to befriend them—and they always punished him for it. He seemed incapable of understanding their hatred of him was political and not personal. As long as he was a Republican president, no matter what he did—running through liberal programs, sustaining and then aborting the Vietnam War, appointing liberals to positions—the media treated him like crap.

And what about America’s general, Dwight David Eisenhower? Didn’t America beg him to run for president after proclaiming him one of the greatest generals in history? Yes, until he ran as a Republican. Most of us tend to forget he was undeclared until he made his decision, and Democrats largely believed he would run as one of them. Once he ran, the press turned on him quickly, declaring him a colorless dimwit who spent too much time on the golf course and not enough behind the desk. His support for civil rights, which has been erased from the Democrats’ memories, was blasted at the time, with revolting terms used to describe him; yet, at the same time, he was consistently berated for not doing enough to further the cause. No matter what course Eisenhower chose, he was criticized severely.

Herbert Hoover was so incompetent that he routinely ranks as one of America’s worst presidents, which would have been news to Americans for most of his administration who found him intelligent, thoughtful, and willing to listen to opposition. At the time, of course, the media ridiculed his boring technocratic theories, felt he was incompetent at understanding the Federal Reserve System, and of course he supported Prohibition. His public image was already tarred long before the Crash.

Calvin Coolidge, by all measures one of America’s best presidents, was seen as a joke of a president. His terse speaking manner and odd sense of humor was not viewed as a positive by the media of the day; in fact, his intellect was frequently questioned. Likewise, media of the day greatly disliked his 9-5 hours, believing that a good president, like Wilson, would travel the world and put in sufficient time promoting big government programs.

And what can be said for Warren G. Harding? Even before the media became riveted with a series of scandals tied to his administration, they were attacking his anti-union views, his tax cuts for the rich, and celebrated his own shellacking in the mid-terms. To be accurate, the bulk of the scandals tied to his administration were revealed after his untimely death; however, the suspicions began among the press fairly earlier than we like to remember.

Anyone remember who was a Republican president prior to Harding? Right, it was William H. Taft, who rather disliked the media. Tired of his words being turned against him, Taft avoided press conferences, gave few interviews, and shunned comments to reporters. This stems from his candidacy, during which the media ridiculed him as a puppet to his predecessor….

Teddy Roosevelt! He loved the press, and they him. Teddy gave frequent conferences, offered the media quarters inside the White House, and let them have run of the place. The Czar learned today that the press only ganged up on him over the Panama Canal; the Czar honestly cannot recall that being the case, but there you go. Teddy was the guy. He was the last American president that garnered respect from the media.

Over a century ago.