Our castle has a big, silver (and frequently lethal) robot dwelling within, and his piece on Federalism yesterday got the Czar thinking about something he read on Twitter.

The ever-brilliant (and darned nice about it, too) @Molratty had a short series of tweets we present here:

People in high population areas tend to want different things than those in lower population areas. This is the beauty of federalism and localism. The problem is when the high pop. areas demand that everyone else do the same things by force of the federal govt https://t.co/BFhu8n9ou8

Why should their policies matter more? What does a Manhattanite know about the needs of a guy living in rural New Mexico?

The fetishization of democracy without also incorporating concepts like federalism and localism is how you end up with too much collectivism, redistribution, and government, period.

Related: the idea that we can be a social democracy like Scandanavian countries requires maintaining this delusion that we are a completely homogeneous people with the same priorities. We are not.

To which this individual replied:

The primary thing a lobster fisherman in Maine, a cabbie in NYC, a rancher in Colorado, and a tech geek in California have in common is the desire to be free and prosper. A federal republic allows that – a democracy doesn’t.

There’s an entire semester of political science crammed into those tweets, and the Czar especially fixated on Mo’s second tweet and @Mark_Derr’s tweet as especially profound. As any number of YouTube videos will reveal, Europeans who have not spent a lot of time in the United States are frequently staggered by its size and complexity. Why, the Czar still remembers when some of Mandarin’s in-laws from Europe came to visit, and boldly announced they would hit Niagara Falls on Monday, drive to Chicago on Tuesday, and swing over to Las Vegas on Wednesday. And these were not dumb people—they just failed to comprehend that America is somewhat bigger than France.

A similar fallacy exists among many urban Americans. Just because you can take the Six from Bleecker to Castle Hill doesn’t mean that a few stops further away finds you in Provo, Utah. To add to the litany of professions listed in the above tweets, a bodega shopper in Brooklyn might not be able to anticipate the needs of a ranch hand in Colorado—and the Czar suspects there is a huge number of New Yorkers, Washingtonians, and Angelinos who would be shocked to learn that there are still cowboys actively moving cattle across vast sections of grazing territory today. 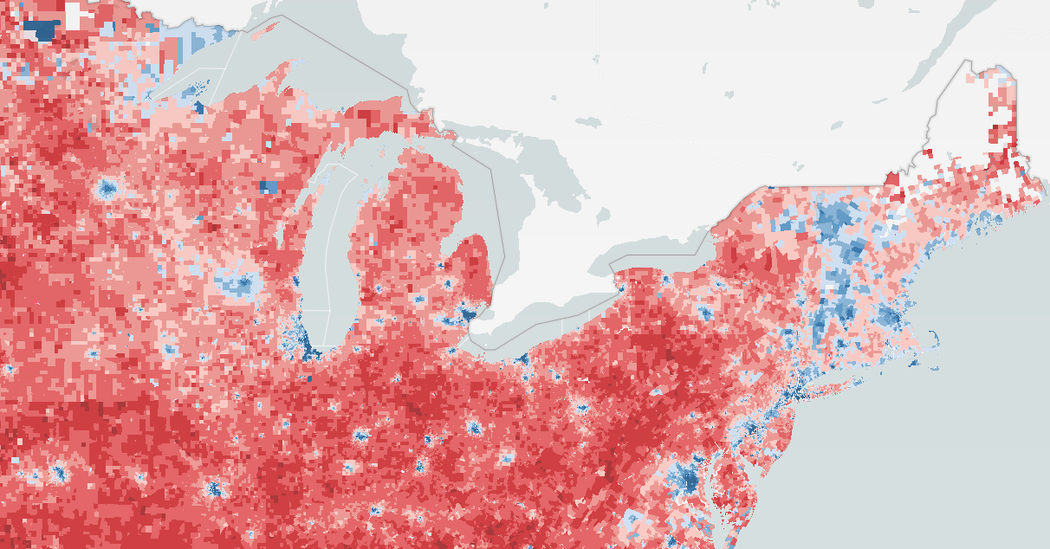 You probably saw the New York Times‘ map of political bubbles, thinly and cleverly disguised as an electoral results map. The Czar agrees with its premise that the more blue or red a location is, the greater the political insulation. No question about it: there are many places in America where people can never meet a Republican…or meet a Democrat.

This ties well into the string of tweets above because most of the sweeping, generic, and inconsiderate legislation driving American nuts these days is coming out of the blue areas; the red areas are certainly far more disposed to leave-us-the-hell alone federalism. Yes, colors represent geographical area, and not population; the Czar understand that. But this is what makes the map so fascinating: Obamacare, student debt bailout, free tuition, and free housing are being promoted by people who have no idea what the vast majority of the country looks like. All those red areas? They just want to be left alone. The blue areas? Big populations, but functionally uniform islands in a sea of actual diversity.

These red areas don’t have subways and bodegas, sidewalks, buses, apartments with rent control, schools with tagging, ATMs, needles on the street, plastic bag bans, sugar taxes, or soccer camps. They probably lack other things, too, such as art museums, hands-on science centers, walk-in clinics, vegan dining options, and hookah bars. But they might have all sorts of other things, like spacious skies, amber waves of grain, swamps, rivers, waterfalls, corn silos, steel plants, roller coasters, church picnics, and more farm-to-table options than every large city combined. And sure, the nearest place to buy clothes is at a Wal-Mart 40 minutes away, and there are probably meth addicts wasting away in run down, tar-paper houses, too, just down from the same vape shops and tattoo parlors you find in the cities.

Of course, the point is that these red-area rubes probably know more about life in the blue areas than the other way around. A chin-scratching yokel who spent eight hours repairing trailers in his gravel-road, rusting, steel-shed repair shop can figure out how to use Uber, or pay at an automatic laundry, or navigate a six-level parking garage in a fraction of the time it takes an Acela Corridor commuter to execute a three-point turn with a flat bed trailer.

There is ignorance in both red and blue about the other’s lives. But, truth is, there’s way more ignorance in blue than in red. To GorT’s point about Federalism, the system was designed to make those differences trivial. Unfortunately, blue has decided it knows better about the world, based on its 4-minute walk to the bodega than red’s 40-minute drive to Wal-Mart.

Maybe bubble isn’t the right concept. Increasingly, America’s aggravation with itself is being caused by people who live in a ship in a bottle, that’s on a shelf aboard a real ship on a real ocean.