Certainly, long-time readers here know the loathing animosity the Czar maintains for the liberal media, and is generally exhausted trying to scream at them all the time. Even so, the Czar is quite aware, thank you, that the emerging conservative media—who otherwise have done a spectacular job on Hillary Clinton’s general rankness, revealed the hypocritical extent of the damage in Louisiana which the President has ignored, and exposed the reality of ISIS and its kin—do make sloppy mistakes themselves.

The Czar has been following what appears to be a story of anti-Americanism from Poughkeepsie, New York. There, the fire department has ordered the engine companies to remove American flags from the fire trucks! Indeed, the comments sections of these media sites go into detail about how terribly anti-American this is, and are perfect evidence of why we won’t entertain your lunacy here with your feedback.

As you read the story, though, the real story emerges quite quickly: the firemen have been told to remove only the flags hung from the rear of the fire trucks. You know to what this refers—get behind the fire truck of most communities, and you see an American flag hanging off the ass-end of the engine.

This “noble” tradition started shortly after September 11, 2001, and frankly the Czar is in agreement with the fire administration for the exact reasons they provided the crews, if anybody in the conservative media bothered to ask.

First, it’s a violation of the flag code to hang a flag, like a diaper, off the rear end of any vehicle. While 175(b) allows for a flag to be attached to the passenger-side front fender or chassis, the truth is that most fire trucks lack a fender or exposed chassis; this is why, prior to 2001, fire trucks prominently displayed a flag on the side of the cab. In the picture to the right, take note of the flag, correctly displayed, above the front wheel. This is correct.

Second, the flag must be kept as clean as possible. The Czar noted no less than yesterday morning a fire truck from Oak Brook, Illinois, driving in front of him, a flag hanging from the rear of the truck. As the Czar pulled up behind the truck, he noted that the flag was stained, blotched, and gray from exposure to diesel exhaust. The flag was truly in such disrepair, that had any of the Czar’s Muscovy neighbors hung a flag that filthy on the front of his home, the Czar would have left a curt note in the mailbox to replace the flag. It was a mess, and yes, the Czar finds that disrespectful.

But isn’t the liberal media following this story as well? To a lesser degree, yes—because the flags hanging off all these vehicles across the country were furnished by the firemen’s local unions—and so management (the bourgeoisie) has decided to stomp on the firemen (the proletariat), which is great for the liberal media. 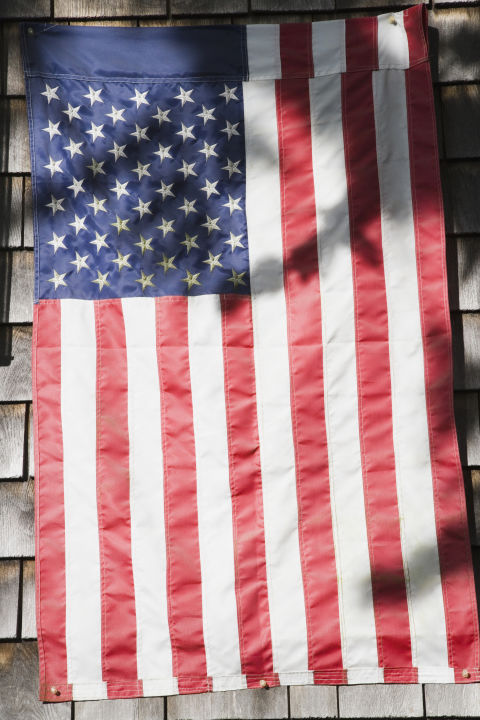 The Czar is quite serious about all of this increasing ignorance about the flag. For example, at a recent outdoor concert in Muscovy, the Czar observed the flag hung incorrectly on the rear of the stage: it had been simply rotated clockwise. When the flag is hung vertically against a wall or other surface, the canton must be in the upper left as shown here. The Czar spotted a local village leader, who blanched when he saw us approach. The Czar pointed out the infraction, and the official was quite happy to request the Park District (who hung the flag originally) to correct it at the end of the act. Which they did.

The Czar’s wrath hardly ends there. The Czar was passing through Hinsdale, Illinois, yesterday evening and spotted with delight that they have decorated almost the entire downtown with American flags suspended from light poles. The Czar was disappointed, however, to see almost a third of them were tangled around the light fixture housing, flipped up there by crosswinds. The Czar attempted to untangle some, but his height was insufficient to reach any. A passing police officer mentioned to the Czar that no sooner does a citizen untangle them, they become re-entangled. The problem is that the Public Works department, who provided the flag poles, did not appropriately plan for this. This nice gesture winds up being disgraceful, and could have been prevented by understanding how to mount flags to poles in the first place.

We need to start getting these things right, and fast. But it doesn’t help when the conservative media hears stories like this and immediately portrays them as examples of anti-Americanism. No doubt some website will link to this story and claim the Czar is requesting Hinsdale to remove its downtown flag display; the Czar believes that if the village can’t get it properly respectful, don’t do it in the first place.

A better response from the Right might be to say “Hey, firemen—your management is right: follow the flag code correctly. And clean or retire the flags you have.” Show some respect, firemen, like we do for you.