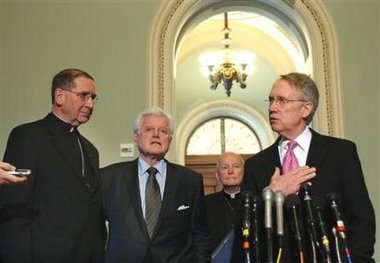 CNSNews.com is reporting that the U.S. Conference of Catholic Bishops will push to get immigration reform legislation enacted in 2010.

Wow, your Mandarin’s first thought is where are the separation of church and state groups, and where is their outrage over this attempt by the Catholic Church to influence political policy. Your Mandarin clearly remembers the outrage when the Catholic Church and the Mormons helped to defeat the “gay marriage” ballot initiative in California. From the outrage expressed by the liberal community you would have assumed that the Church was calling for the extermination of the homosexual community.

So why is it now that we hear nothing from our progressive/leftist friends about this obvious attempt to influence the immigration debate? Because my friends this is a cause that is near and dear to their hearts.

Many immigration reformers and progressives/liberals seem to confuse the difference between citizenship being a privilege and it being a right. Being a citizen of this country is a privilege that is bestowed on those born here and those immigrants that have fulfilled the legal requirements to become a citizen. Any rights that are enjoyed by the citizens of this nation are contingent on their citizenship status. No one born outside of this country has a God-given right to become a citizen, especially when they have broken the laws of the very country they wish to become a member of. The last paragraph of the article that includes this quote from Congressman Gutierrez, “Illegal immigrants have waited years for reform. We’ve waited long enough.” This again demonstrates the left’s confusion with what is a right and what is a privilege.

Funny, if you violate the laws of the Church you face excommunication. But in this case, if you break the laws of the U.S., the church wants the government to embrace you.