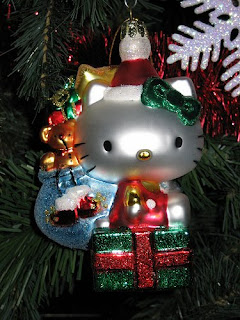 A Hello Kitty in an orange tree

Over the next twelve days, join us as we share a little holiday cheer with our readers by way of a familiar holiday tune.  We’ll tie days in to various past posts, insights into life in the Castle and maybe a few inside jokes with which you’re just going to have to deal.

As pictured, the first ornament on the tree is Hello Kitty.  ‘Puter pushes through all of us to put it on the tree and stare at it for hours while the rest of us finish the decorating.  The Volgi won’t go near the tree as it is a citrus tree which he fears.  Good thing too, otherwise, I think he might break the fragile ornament while screaming at it, “and yet you scream!”

The Czar and Mandarin don’t know what to make of the scene so the Czar buries himself in his research on future postings and the Mandarin goes back to tinkering on another laser interferometer that induces instantaneous state change in the outer electrons in Xeon molecules.  What he’s doing with it, we’re not sure.