↓
Home→Uncategorized→Australia Is Doomed! They Think For Themselves! 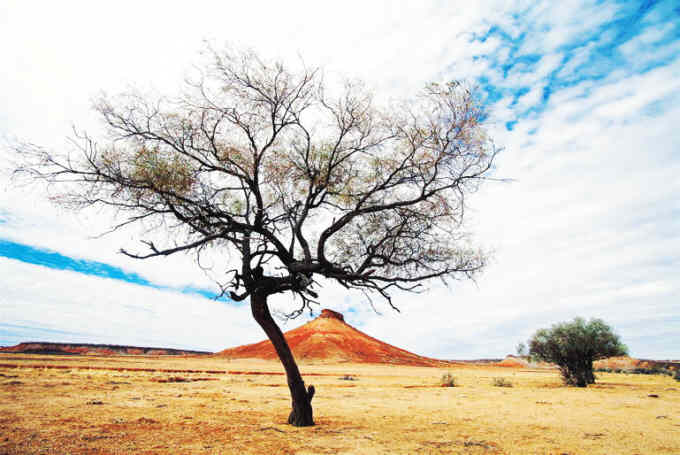 Fulfilling the Gormogons’ expectations that the climate change folks will be flooding the newswires with anecdotes of Global Warming Killing Everything, comes Fred Pearce’s Guardian plea to find some way to shut the Australian climate skeptics up.

Note the welcoming picture of the dead (or simply sleeping) kangaroo on its side in the Outback. Fred Pearce is not evidently aware that a massive amount of Australia is a desert. Wait—he is: his first sentence acknowledges that Australia is the hottest and driest continent on earth, so we should not be alarmed or even surprised to see a lot of hot-looking sand and rocks.

Actually, Mr. Pearce, Antarctica is the driest continent on Earth, but we think we get what you mean.

Look at this nonsense: “Things got so bad last week that thousands of camels besieged a small town in the Northern Territory in search of water. Even the ‘ships of the desert’ couldn’t cope.” A bit of a red herring there; Australia being the hottest and driest continent surrounded by salt water has resulted in Australia always being short of water. Camels are not native to Australia, and need plenty of fresh water. No, they cannot cope with a perpetually water-short environment to which they are not native. Water shortage has been a problem in Australia since the 1800s, and far too many homes have been built in areas that cannot retain water in the soil.

Gormogons Spotlight On: AustraliaSo here’s one back at Mr. Pearce: things got so cold in the Muscovy area last winter that fish froze to death in the lake nearby. Yes, the logic is exactly the same, because anecdotes are not data.

“So why do the [climate] deniers hold such sway?” he asks. Perhaps because Australians are a tough, hardy, and pragmatic bunch who know their land and environment better than some whiny Brit journalist who cannot seem to support his argument with reasoned facts other than pointing out the Australia sells a lot of coal and pulled out of the Kyoto Protocol deal with America.

And don’t shred the Australians because they ship more coal than any other country. They have it to sell. And guess which united kingdom is buying a massive amount of that coal? Yours?

The Czar thought that the editorials would be better than this in light of the Hadley CRU mess. Frankly, these are pretty sad. Check out the closing sentence for pure B-movie histrionics (picture a scientist with a clipboard staring at the horizon): “[If] the world fails to come up with tought emission cuts…there is a real risk of the entire nation becoming uninhabitable.” Check your map, Pearce. Most of Australia is uninhabitable now and always was.