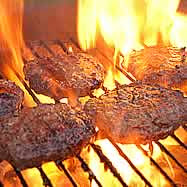 Note to readers (and fellow Gormogrillers), be cautious of grilling large amounts of food where the grease builds up.  Our kids’ school hosts a “homecoming” each fall centered around the intramural flag football league.  It’s a good time with face painting, games for the little kids, flag football under the lights and a cookout with brats, hamburgers and hot dogs.  Well, with a crowd in the hundreds, and plenty of hamburger patties going on the grill, the inevitable happened – flame on!  Luckily a few of us knew what to do and stopped the “let’s pour water on it” crowd.  We calmly disconnected the gas tank, moved it away from the crowds and dumped a 5lb bag of flour on it.  I worry that the nice family who loaned the event their grill might not be happy…but no one was hurt and few people even knew something was on fire.  So make sure you know what to do in case of a grease fire – water is not the answer.