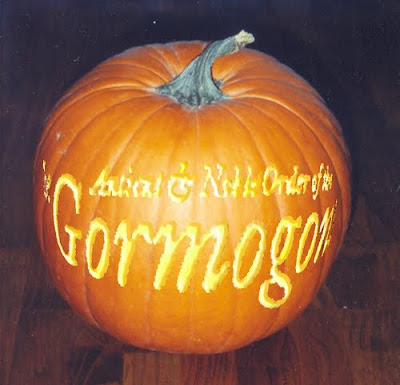 Imagine walking up to a scary castle, inhabited by a nine-foot-tall robot from the future, who wants nothing more than to open your skull to install chunks of technology into your brain. And then, behind the robot, is a mad brute of a sociopath who would vivisect you with superhuman strength while laughing hysterically. On the floor above, an enraged psychotic madman with an axe, lashing out in sadistic rage against anyone who dares oppose him. And lurking in the basement is a cruel, evil genius dressed as an ancient Chinese warlord performing sinister experiments on interdimensional space intent on enslaving the human race as an army of zombies. And, in the inner sanctum of this horrific castle, is an impossibly ancient wizard who hovers ten feet into the air, hurling out fire and lightning from his hands, while he invents new hells for foolish mortals.

Yes, you would think Halloween is a special day at the Castle Gormogon. But as you see from the description above, we pretty much treat it as any other day.