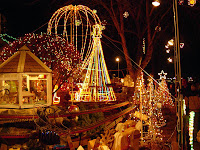 Given the good weather here in the DC area, GorT and family decided it was time to hang up the Christmas lights.  Mind you, we’re not turning them on until after Thanksgiving (a family rule – 1 holiday at a time) but I’ve pretty much had it climbing the roof and hanging lights in sub-freezing temperatures.  Stores and local municipalities have decorated themselves all up with lights and bows.  Christmas lights and other decorations became available at our local hardware store near Halloween.  I know that the current administration is having trouble dealing with the economy but starting the Christmas push almost three months before the holiday is a bit ridiculous.

Next project – the decoration of Castle Gormogon.  Details and pictures will be coming soon.