↓
Home→Star Trek→Will we be thrown about randomly as we accelerate? 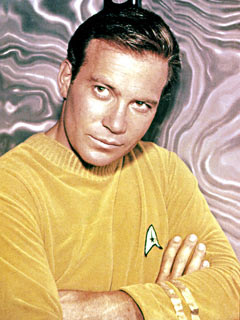 Ok, ok, my fellow Gormogons have subtly prompted me to post something, anything related to Star Trek.  So let’s start with this tidbit.  Over on SPACE.com, there is this article reporting on some scientists’ belief that faster than light (FTL) travel is possible (a/k/a Warp Drive).  There has been this problem with Einstein’s thoeries and all sorts of possibilities of what would happen as a person or object approaches (and maybe passes) the speed of light – pancakes into single dimensionality, ages faster as speed increases (a la Walter Donovan), etc.  Given the advancements we’ve seen in the last 50-100 years, I can’t say that I’d rule it out.  I’m not sure when or if we’ll get there, but even the possibility is worth pursuing as it would open up the Solar System, the Galaxy and beyond for exploration.  Of course, if we have to hunt the universe for dilithium crystals to power it, I’m not on board.

(Note, I’m peppering this with links to augment your reading experience…)
Taking a left turn here, I’m actually interested in seeing the new Star Trek movie (although I might have trouble expecting Zachary Quinto/Spock wanting to slice open people’s heads with his finger-pointing telekinetic power).   In my opinion, Rick Berman and his crew weakened the Star Trek franchise.  Sure, there were some a few cool ships and technologies, a few good characters, but largely it was weak or stiff acting with a kumbaya storyline with uninteresting characters.  I’m sure I will get lambasted by others to defend elements from Star Trek: The Next Generation, Star Trek: Deep Space Nine, Star Trek: Voyager, and Enterprise and all of the movies but please note, I did say “largely” and one can easily go back and find crappy episodes from the original and some cheesy characters.  I do admit, I have a weak spot for the short-lived animated Star Trek series – at least it was very appealing at the time.  Having said all of this, I’ve read and heard that the writing, casting and acting in the new film is excellent and that J. J. Abrams does a good job opening a new opportunity in the “Star Trek universe”.  Jonathan Last gets it right here – I tend to agree with his premise about the rise and fall of Star Wars and Star Trek franchises.
Are you one, Herbert?