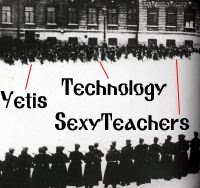 Your Czar, whatever his many faults may be, is at heart a sore winner.

The Czar has combed through the archives to find this photograph of the last night of our brackets, in which helpless yeti, a pile of Macintosh SE30s, and a handful of hottie teachers, is mowed down by Czarist troops. The Czar, in the spirit of the Second Amendment, is allowing them to keep their weapons, too!