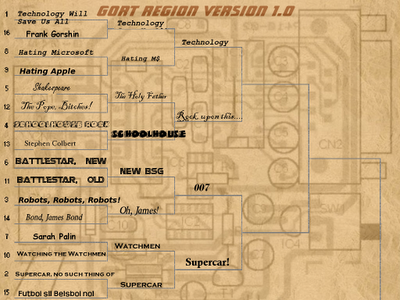 Click for more pixels
The annoying popup MS Office assistant was no match for the elements of Technology Saving Us All and Hating Microsoft was defeated easily.  The Pope issued a number of edicts dismantling the 70’s folks tune attack launched by Schoolhouse Rock.  After a few exclamations like “Hey! Darn, that’s the end!”, the head coach of the S.H. Rock team mentioned a Religious Rock series as a possible addition to the team next year.  In the lower part of the bracket, the games were much closer.  James Bond went mano-a-mano with the Adama family and Kara “Starbuck” Thrace and with some help from M and Q, outlasted the new Battlestar Galactica (whose series finale was last night – pretty good, with previews for a special in the fall and a new series, “Caprica”).  The oddly powerful Supercar commercial came back late in the game to defeat those watching the Watchmen.   We look forward to a real tight set of matches next weekend when the Pope takes on Technology Savings Us All and Bond faces the power of public transit commercials from the 1980s.