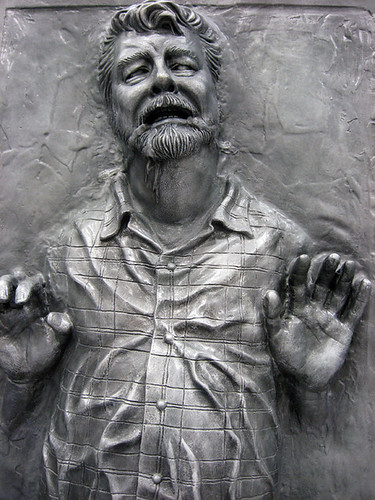 It’s weird how relevent the Gomorgons website is to every single thing the Czar thinks about. His six-year-old Царевич has recently completed a Lenten sacrifice by watching all six Star Wars episodes in their entirety (that means without wandering off for a few hours) over the course of two weeks. The Czar watched them alongside, pointing out little things here and there.

Elsewhere, the Volgi asks if there really was a Wagnerian Ring Cycle in George Lucas’ brain when he worked on Episode IV, especially based on the sometimes unnerving changes among re-releases.

Likewise, Klaatu enforcer GorT (you think the name is but a coincidence?) has a hard time believing that Lucas was furiously concocting Episodes V and VI while wrapping up IV.

Gentlemen, Lucas always envisioned a complete saga of dual trilogies, one good, one evil. He has insisted this from the beginning.

Except, this is a hoax.

The Czar, eldest of the Gormogons, remembers the Summer of 1977 quite well. He was bemused by the long lines, the buzz, the hype surrounding Star Wars. Back then, you see, it was just Star Wars. There was no Episode Anything.

The Czar’s own father, interested by the strength of co-worker recommendations, plunked down a total of $8.00 for two tickets at the Norridge 4. Yes, four theaters in one building, which was a mind-blowing concept. That capital cost would explain the outrageous ticket prices. But the two of us felt we got our money’s worth, having seen a film with a good beginning, decent middle, and exciting end. All neat and wrapped up. All logical and tidy. No unanswered questions.

And the Czar remembers the first interview he read in the newspaper with George Lucas about three weeks later. When asked about a possible sequel, Lucas said he certainly would welcome the opportunity, hey, maybe even making a trilogy… the last film of which could feature Luke and Leia having children together. Or something; it’s just an idea.

In the late summer, the film had finally made it to the dollar shows, and the Czar convinced his eldest brother to just see it already. The two of us went—the Czar had never seen a movie twice in a theater before—and pow, the movie began. The famous blue letter opening crawl began…in yellow, and now the words Episode IV: A NEW HOPE led the way. “Episode IV? What the hell is this?” our brother exclaimed, noting our own shock and surprise at this change. People openly grumbled and stymied all around us. Uh, this is Star Wars, right?

So yeah: the idea of a dual trilogy appeared somewhere between May and September of that year, and Lucas already had enough pull to re-release the movie while it was still in the theaters. But the Czar recalls quite clearly that there was no dual trilogy planned prior, or there would have been far more clues in the original. And less physical attraction between Luke and Leia, right? Right? And less of an overly condensed, over-wrought summation at the end of Episode III, where we endure a half hour of Jimmy Smits nailing every widely known loose end between the two trilogies reading off some fansite checklist. “Oh yeah, and wipe the droids’ incredibly valuable memories for no evident reason.”

And real quick, screw the whole Darth Vader thing. After seeing all six movies, the Czar concludes that the best thing in all six movies is Harrison Ford’s ad libbed acting (he purportedly so hated Lucas’s dialogue with a deep passion, claiming it was responsible for the wooden acting in the films, that he made up his parts as he went to get more realistic reactions from the rest of the cast). Second best thing in the movies? Darth Maul. It used to be the venomous Boba Fett, but when he became a loyal family man spread across four films, it ruined his character. Maul was great because he was rarely on film and spoke little. The Czar wishes this were true of many actors. 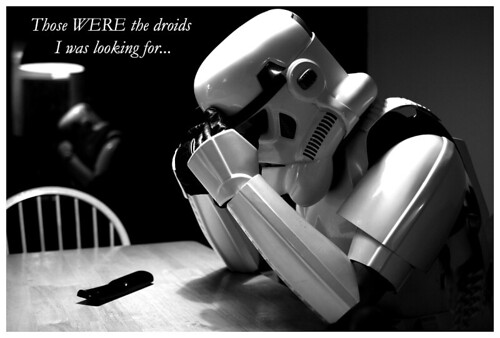