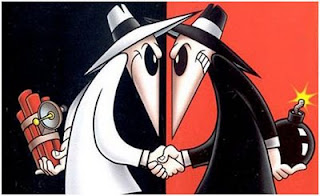 America needs a good, functional intelligence community now more than ever. With the fiscal problems looming, there is cause for concern for instability and aggression from a variety of fronts. One only has to look back at some of the posts here to make a list: Russia, China, Israel, Iran, North Korea, Saudi Arabia, etc.

During a meeting today at work, GorT and several co-workers were discussing the near-term future of the Intelligence Community. One person brought up the latest nomination for the chair the National Intelligence Council – Chas Freeman. It’s timely given some of the recent blog posts and OpEds. Mr. Freeman has questionable ties and/or past prejudices with regards to China, Saudi Arabia, Iraq and Iran. But given the rash of tax dodgers put forward, I doubt much vetting was done by the administration to ferret this out. Luckily, the ranking republican member of the House Intelligence Committee, Rep. Pete Hoekstra (R-MI) is calling this issue forward. Jamie Kirchick’s piece in Politico is worth reading today as well. You can read Rep. Hoekstra’s letter here.

Without going into detail for obvious reasons (#1 being that we’re not the NY Times so discussions of the Intel Community should be closely held), there’s lots of good stuff going on there and there are plenty of smart people. I just hope political appointments like this doesn’t derail the advancement of the American Intelligence capability. The landscape is changing – now we’re faced with gathering intelligence in a guerrilla warfare environment and I’d wager that a “cold war”-esque relationship is brewing between China and the U.S. We’re facing new challenges with the ever advancing technologies including Cyber Warfare, space-based weapons and improvements to technologies once exploited or cherised by covert operatives. Time to pull our trenchcoats a little closer around ourselves, don the fedoras and channel a little Nathan Hale.