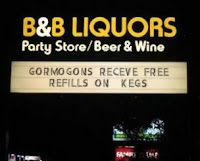 The Czar of Muscovy is overwhelmed to accept such a glorious invitation to post here on the Gormogons website. This is quite a smart bunch, and your Czar is as humbled as one (gifted by the grace of God with a finely polished ego) could be.

Loyal Gormogons worldwide (and the Czar is especially pleased by the owner of this Canton, Ohio, liquor store… party on, B&B!) are lucky enough to know how well balanced this group is.

The only thing that the Czar brings to the table is a strongly implanted dose of skepticism. And that must make things a bit scary, for the Czar may not always agree on matters of science and religion. Conversely, the Czar hates the mainstream media even more so than, perhaps, the others here, for the Czar remembers those who went into journalism in college and why they had to.

Finally, the Czar loathes invidividuals who refer to themselves equally in the third person singular and first person plural, except in cases where it fails to conflict with our double standard.

At any rate, we are humbled to be part of this superb organization, knowing full well one of the original members welcomed us with “Pfft. We need the dues.”