↓
Home→Uncategorized→Where have all the good men gone? 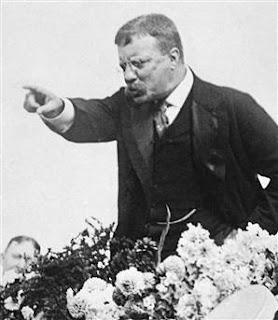 I was doing some light surfing today and came across this article. I’ve been to TR Island – it’s very enjoyable. I’ve been to many national parks and forests that are here largely in part to President Teddy Roosevelt. He was the first American to win the Nobel Peace Prize for his work in bringing the Japanese and Russians together to negotiate the end of the Russo-Japanese War. As pointed out in the article, he was a conservationist not a preservationist. This is in stark contrast to the, as a friend of mine likes to call it, “Big Environment” movement. Compare the complete lack of accomplishments by former VP Gore (also a Nobel Prize winner) vs. what Roosevelt accomplished. Maybe we need some “Big Stick” types back.