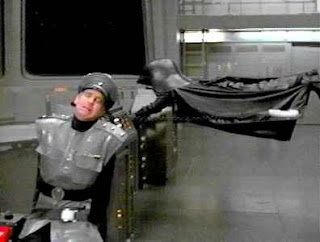 I’m a big fan of telling people and the government to get out of the way of innovation. There is so much that can be accomplished when the bureaucrats don’t throw up roadblocks. Therefore, I present these two articles on the possibilities of FTL (Faster Than Light) travel not being too far off in the future. The first is from two physicists at Baylor and the second I’m excerpting below as the original seems to have gone offline:

AN EXTRAORDINARY “hyperspace” engine that could make interstellar space travel a reality by flying into other dimensions is being investigated by the United States government.

The hypothetical device, which has been outlined in principle but is based on a controversial theory about the fabric of the universe, could potentially allow a spacecraft to travel to Mars in three hours and journey to a star 11 light years away in just 80 days, according to a report in today’s New Scientist magazine.

The theoretical engine works by creating an intense magnetic field that, according to ideas first developed by the late scientist Burkhard Heim in the 1950s, would produce a gravitational field and result in thrust for a spacecraft.

Also, if a large enough magnetic field was created, the craft would slip into a different dimension, where the speed of light is faster, allowing incredible speeds to be reached. Switching off the magnetic field would result in the engine reappearing in our current dimension.