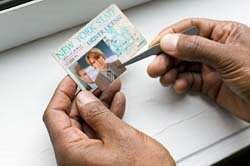 Ok, the Olympics are over and done and it was a good time regardless of the rhythmic-synchronized-judged “sports”, fakery, propaganda, etc. But the drama continues. Kudos to the folks over at Stryde Hax on continuing to pursue this underage Chinese competition scandal. I have to admit that reading through the evidence and ‘net trail they uncovered is pretty telling. If you’ve got a few minutes to dive in, I recommend it and then be the judge – were they so driven to compete at a gold level (and then to keep the gold medal) that they are engaging is this level of coverup? Can they maintain this without leaks? Is He Kexin just jonesing for a beer? My recommendation to the Chinese government from past observances: make sure you don’t try making the fake ids in your AP Art class.