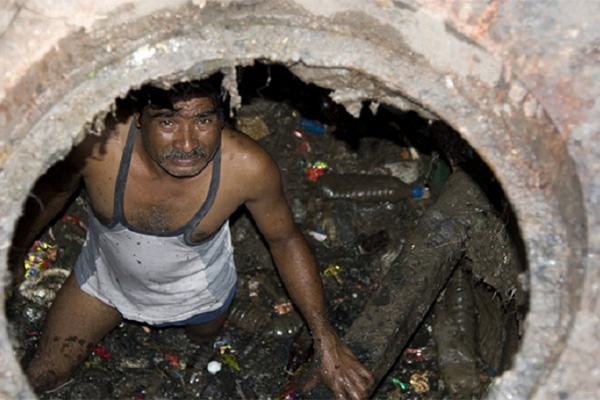 Thank you, crazy Indian sewer worker, for unclogging the Castle’s plumbing after all you can eat kimchi and kumquat night at The Leaping Peacock. You have been promoted to Chairman of the House Intelligence Committee. Sorry.

Each morning ‘Puter stops at a McDonald’s near his office to pick up a steaming hot cup McDonald’s decaf.* Three creams, no sugar. Get it right.

Nearly every day the same woman takes ‘Puter’s order and gets ‘Puter his coffee. She is unfailingly kind, upbeat, and smiling. Too kind, upbeat, and smiling for 6:30 AM. Her name is Patty. Patty is rail thin, has long, mostly gray hair pulled back into a ponytail, and crooked teeth that only make her smile more charming. Patty is probably somewhere between 60 and 65 years old.

When ‘Puter takes time to think about it, ‘Puter is amazed at Patty. Here is a woman at retirement age (or darned close) who shows up each morning for an early shift at a job many would consider beneath them. She does her job exceptionally well and without complaint. She radiates self-confidence and happiness. Patty cannot be making nearly what she deserves.

‘Puter thanks Patty every day and talks to her a bit, about her weekend coming up, about where she was last week. ‘Puter wishes he could do more.

Patty is the face of millions of workers across America today. A good person working a difficult job for low pay and doing the best she can. ‘Puter figures the least he can do is to say thank you.

So, thank you all of you working difficult jobs which don’t pay you what you deserve.

Thank you, Patty and all the other fast food workers like you. You give those of us in “better” jobs perspective.

Thank you, people who pick up my trash, treat my sewage, and provide me clean water. You have saved more lives throughout history than all the doctors and surgeons combined. Suck it, Doc.

Thank you, moms who sacrifice careers and higher living standards to stay at home to raise (mostly) well-adjusted kids. Your kids will do great things.

Thank you, moms who go to work each day because they can’t afford not to and raise (mostly) well-adjusted kids. Your kids are no less likely to do great things no matter what guilt-trippers tell you.

Thank you, good teachers at every level. You may never fully know the enormous impact your life’s work has had on America.

Thank you, office workers. You work stressful jobs and make your bosses look good whether they appreciate it or not. We see you.

Thank you, cops. Those of who just want to do your jobs, not hassle anyone unnecessarily, and go home. We appreciate you.

Thank you, religious leaders of all stripes who work with vulnerable populations to make their lives better. In doing so you make the entire country a better place.

Thank you, public defenders. You do a job that many people hate you for doing. In defending poor criminals, you’re defending all our rights.

Thank you, truck drivers and railroad workers. You do a dangerous job invisibly so that we get our food, clothes, and other consumer goods seamlessly.

Thank you, oil and gas workers. From wellhead to refinery to pipeline to city gate to point of sale you power the country. Without your work we’d be sitting in the dark eating cold canned beans.

Thank you, farmers and farm workers (all of them, even the illegals), whether dairy, livestock, hard crops, or perishables. We don’t think about all the hard work, know-how, and time it takes to put a meal on our plates.

Thank you, manufacturing workers. You produce all the goods we use every day and take for granted, from cars to appliances to apparel.

Thank you, coders. Sure, some of you rat bastards are overpaid. But many more of you toil in thankless anonymity for relatively low pay. Without you, none of our electronics would work as well as they usually do.

Thank you, soldiers, sailors, airmen, Marines, and coasties. You literally put your lives on the line for our nation every day.

‘Puter knows he missed thanking a lot of people. But it’s a start.

*Shut up. ‘Puter’s doctor made him quit caffeine. He hasn’t had caffeine in probably 10 years or so. Do you want ‘Puter’s hear to explode? ‘Puter thought not.