In an effort to make this site vaguely useful for some of you, the Czar is offering some reviews of 2018 cars. The Czar knows lots about cars, but not a lot about the new models, but don’t let that worry you, because you don’t, either, or you wouldn’t be reading this.

Buying a new car requires you to do a lot of research, which is good because we haven’t done any. This should be relatively brief because there are too many cars to cover today. As a result, this list isn’t exhaustive. Exhaustive! Get it? By jove, we must be the funniest autocrat on earth. 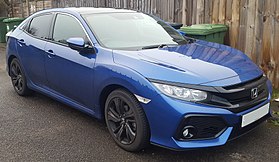 Honda Civic. appropriately parked with the trash cans. With luck, a generous trash collector will just pick it up on Tuesday.

The Honda Civic is unappealing, slow, and devoid of useful features, making it perfect for the typical Honda owner. Ideal for coming to complete stops when making simple right turns, or for lingering at intersections when the light turns green to make really sure the cross-traffic has stopped, the Honda Civic boasts a larger, more powerful engine this year that’s perfect for driving exactly at the speed limit in the right lane.

With an all-new, fully refined and computer-augmented handling system, the Honda Civic is capable of tight, clean maneuvering…although this is a feature that will never be used. If your idea of fun is letting the car rest quietly in a clean garage until needed while you read classic literature, give the Civic a solid look.

The Toyota Prius. This is actually live video, showing how fast it can go.

If you’re the type of driver that really likes to annoy other drivers, you can’t do better than the Toyota Prius. Many automotive magazines rate the Prius as the world’s most popular car for driving five miles an hour too slow in the left lane. Which, we should add, the car will never get out of. Its new speed-matching technology will find the slowest truck on the highway and ride next to it, preventing anyone from getting past.

Although its lane-change signals will never be used, drivers will appreciate the Prius’ LED virtue signals, which never turn off. “Look at me!” this car says, “I’m saving the world by using less gas.” If you read the fine print, you’ll see its battery technology costs more than 1,000 gallons of gas and has a Sasquatch-sized carbon foot print.

The Ford Mustang! Or rather, a Taurus with cosmetic trim and a rougher ride.

Let’s say you’re still 13-years-old, mentally, have no idea what things cost, and have no clue what constitutes an average-sized penis. Look no further than the Ford Mustang, which is perfect for your inner adolescent to rev up nice and loud before wrapping it around a mailbox.

Did you know the 2018 Ford has a Friendly Neighbor mode option, which turns down the volume of the exhaust and engine? That tells you the bad-ass-ness of this car is pure fiction because you can turn it on and off. Put it up nice and loud in drive-thru restaurant parking lots, and then, a block from home, you can turn it down so mom and dad don’t get annoyed and take your key fob away from you.

The Buick Regal, which is hardly regal in any sense of the word you’ve ever heard.

Pulsing trance music and wild-eyed Millennials in the commercials tell you the Buick Regal is not your grandfather’s car, even though that’s exactly who buys Buicks now that Oldsmobile folded up. GM has, for years now, tried to pitch Buicks to people who might live longer than the 3-year-warranty, but no such luck. It’s still bought by blue-hairs, and the only youngsters who drive these are inheritors who take it from dead meemaw’s garage right to the used car lot to get cash for it.

But, wow! When the old-timer sits behind the wheel of the 2018 Regal, they all say the same thing: “My 1982 Buick was bigger. There was more room, and it looked nicer. And what’s OnStar?” 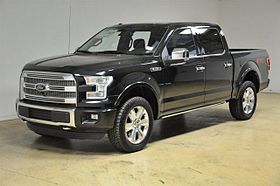 Did you know the best-selling vehicle in the world is actually the Ford F-150? Well, it is! And why not? It’s totally American: it’s big, roomy, and powerful. Yeah, it takes up a lot of room, and eats up gas like crazy, but when you need to haul some serious trash out to the dump, what are you going to want? Some European two-seat piece of filth, or some lightweight Korean knock-off? No, you’re going to call the beast.

Only in America can you get a truck—a truck, mind you—that comes with seating for a family of five, GPS, cup holders, and an ear-bleeding stereo system with hundreds of sat channels. You could live in one of these, because (to be fair), many Americans do. So you might as well do it in style.

The Cherokee Trailhawk, hated by the traditional Cherokee owners, and loved by the people who actually drive them.

Or you could drive what the Czar drives. This isn’t even a 2018: the Czar drives a 2014 Jeep Trailhawk. Yeah, the transmission is goofy-enough to where he usually operates it manually using the slap-stick, but this six-cylinder whack-job can drive straight through gravel piles, dig through Great Lakes snow and ice, and get to 80 miles per hour really fast.

And check out those cool red hooks. This thing can drag your little Nissan Juke out of any ditch using the tow hooks and, for good measure, rip off its rear bumper to teach you a lesson about staying off the road. And the sound system is really good, and the Czar finds its sat nav system super easy to use.

Okay, that’s our wrap-up for the 2018 cars. The Czar could keep going, but you’ve already stopped reading.