Some days ago, the Czar was in his Trailhawk headed east-bound on a thoroughfare through Muscovy, when he saw in the west-bound lanes a fellow Jeep driver—this one in a stupidly “tacticalized” Jeep Wrangler, with blackened windows, snorkel, black tow winch, and black angry eyes headlight cowl. Whatever floats his boat, we thought; no doubt the driver felt positively badass while driving past strip malls and fast-food places in that expensive mess.

Ah, but then… as he passed us, the Czar saw an American flag hanging off the back of that Wrangler, whipping around. 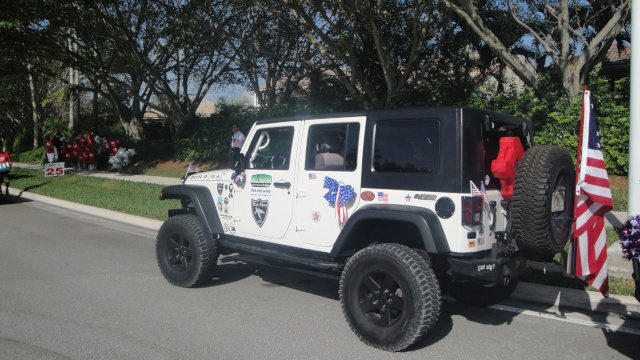 Doubtless the driver thought this a patriotic display, but in fact, it’s a fulsome violation of the flag code. See this guy, in this picture? Major no-no.

Think about it: this driver believes he travels ahead of the American flag, when in fact the flag should precede him. And let’s be clear: the flag is not there to catch your mud, dust, road debris, and exhaust as it comes off your vehicle.

Here’s what the flag code says about displaying flags on vehicles [4 US § 7 (b)]:

The flag should not be draped over the hood, top, sides, or back of a vehicle or of a railroad train or a boat. When the flag is displayed on a motorcar, the staff shall be fixed firmly to the chassis or clamped to the right fender.

An acquaintance of the Czar mentioned to us today that he had no idea that the flag code was so precise about displaying flags on vehicles. Indeed, it’s likely most of the people shown in the no pictures above think they’re doing a wonderful thing. But the flag code covers vehicles, and for very specific reasons: too many flags on vehicles are spattered, ripped, frayed, torn, or dislodge from the vehicle. The flag deserves better than that, of course, and that’s why there are specific laws about this.

Care to argue? The Czar recommends reading the code first: you may be surprised how incredibly specific it is. Check out 4 U.S. Code § 7 (o) if you want to be amazed.