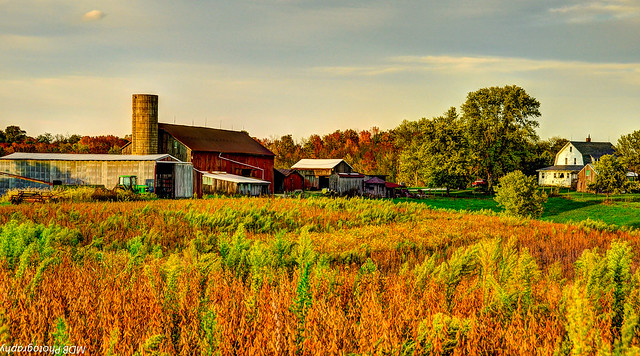 The Czar got three things wrong this election: he originally said in 2012 that the Republicans were certain to lose in 2016. He said that Hillary Clinton would not run because she was inherently unelectable. He also predicted Donald Trump would be destroyed on Tuesday. We admit that, and we got the salient points of that wrong.

The Czar does not like being wrong, but he assumed the media was controlling the message and that the hagiographies of Hillary Clinton would overpower the under-working Donald Trump. The Mandarin, on the other hand, took note of what the folks were saying. And although the election was over, the Czar decided to check up on that.

Yesterday, the Czar and his family drove down West 90 to Highway 31, deep into Indiana. This was a gorgeous drive, with red, bronze, and orange trees and shiny ponds reflecting the deep cornflower blue skies that happen this late in the year. Punctuating this sea of Autumn woods were century-old farmhouses with a mid-season mix of pumpkins and Christmas lights. Desultory smoking leaf piles in yards put a few patches of spicy fire into the air, teasing you for a second as the vehicle shot through them with the scent of homecomings, apple cider, football, and pickup trucks. And everywhere, work was being done: people with dirt up to their elbows digging, building, and maintaining. Horses seemed to be the only ones taking it easy, with their winter hair coming in as they fearlessly grazed in cool but comfortable temperatures.

By October, there were no Clinton/Kaine signs to be found around here. One could have traveled from Lowell to Madison, Indiana, and seen nothing but Trump/Pence signs everywhere. This was the state that nominated Trump; it was also a state that elected him. And the Czar talked about politics with them yesterday—for hours, more precisely, we let them talk to us. The Czar found a lot that was interesting in the Crossroads State.

Indiana wants to change the world. They feel that Mike Pence is the guy who will actually run the presidency, with Trump acting more of the spokesperson. Pence is the COO to Trump’s CEO, and Trump’s appointment of Mike Pence as head of the transition team confirmed this for a few of our pontificators: Trump effectively gave the keys to the country to Mike Pence, whom they view as the lever who will move the world back to some sanity.

Most critical to Hoosiers was the Republican Senate. With a Republican Senate and House, a President Hillary Clinton would have been kneecapped the second she pretended to take the oath. But with a President Trump, only good can move forward: any of Trump’s bad ideas—and we heard a bit about them, too—would be similarly stopped by Congress; but any of his good ideas would be blessed immediately.

Like the repeal of Dodd-Frank. That law was a terrible blow to Indiana: many Indiana businesses depend on each other. If one business doesn’t get funded by a loan, it can’t pay its debts to a supplier. That supplier can’t pay its debts to distribution. The distributor can’t pay its debts to the manufacturer, and so on, until it comes full circle. While this is obvious across the country as an economics lesson, it’s the primary business model in the Hoosier state: every business owner in Indiana, it seems, can recite by name every other owner with whom he or she does business, and how much money each is owed. It’s why Obama wasted a trip to Elkhart in 2012 to sell a fantasy that he had turned things around. The news that the likely repeal of Dodd-Frank is a couple months of way is like hearing footsteps on the roof at Christmas Eve. Indianans think this is probably how the rest of the country should react. too.

And no, not so much the Second Amendment or immigration: those topics never really came up except in casual mention. But the rioting happening in weird, exotic places like Portland or New York or (shudder) Chicago gets a shrug and headshake of disbelief. We now see the Hillary supporters for who they really are, it is said, and the violence indicates how a Hillary Clinton would really govern. That the violence seems confined to a few local areas run by Democrats is just further indication that nearly all Americans once again agree with Indiana. No, Governor Mike Pence is not the twin of Ronald Reagan; but to Indiana he is a fundamentally good, decent man who kept taxes low and helped save the state from ruin. Dealing with the whackjobs in Gary, Indianapolis, and Bloomington was easy because he put a lot of them back to work, lowered their gas prices, and even wiped out their estate taxes. His biggest public relations failure was the Religious Freedom Restoration Act, which most Hoosiers think was the right decision to make. Yes, it made Pence look like he didn’t give a crap about snowflakes, which is how it looked during his debate against Kaine when Pence refused to apologize for or even acknowledge Trump’s ill manners. He’s not worried about annoying people who will never support him anyway.

And this guy, not Trump, is the guy they see running the country. But Indiana isn’t looking for anyone’s thanks or gratitude. They just quietly, and not so quietly, think you’re going to like the way things turn out. Indiana sure did, and they’d love to tell you about it.