The Czar is a giving Czar, and it warms his heart to see someone as famous and respected as Uncle Jay—the Big Guy, and the guy who should have gone into gritty, rage-filled urban hate rap instead of fiber optics—supplicating in such a worthy and professional manner as this: 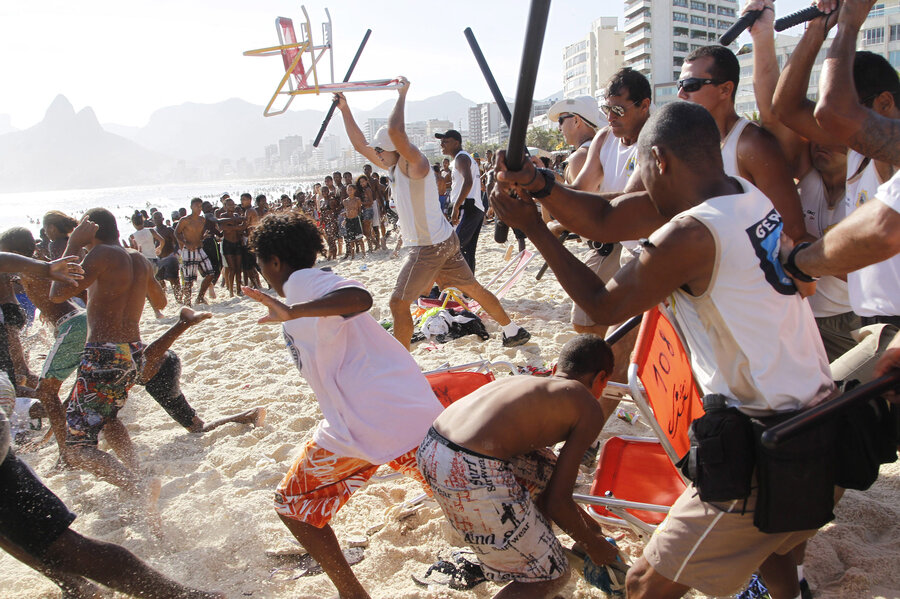 This actually is Rio. This may not be one of the Olympic sports, but that doesn’t mean you won’t see this at some venues.

Brazil is basically all the cut-throat lunacy of a Mexican pirate town plunked helpfully in the center of a sweltering jungle, featuring a river filled with creatures that have teeth the size of your aunt and the predilection to eat something her size with them. Another feature of Brazil is the fact you can drive about ten minutes in any direction (in theory, as there aren’t nearly enough roads) and find yourself in a stone-age culture equipped with blowguns and cell phones. They will not hesitate to use both. No, the Czar doesn’t mean “either,” he means “both”: they’ll gleefully put a dart in your neck while talking to their agent.

Brazilians, on the other hand, are great for parties. The Czar strongly recommends befriending a Brazilian if you like to eat, drink, roller skate, dance, and basically repeat this every hour until four or five in the morning. These people do not quit.

It has been decades since the Czar went to Rio, though, so let’s see what we remember. Your high school Spanish will be just as useful to you here as when you went to Cozumel, by which we mean totally useless. Brazilians, as you already know, speak Portuguese, not Spanish. Portuguese is an interesting language that’s half-Spanish and half-arrogance. It has a lot of shushing noises, which is linguistically interesting: since Brazilians spend about two-thirds of their day inebriated, they simply modified the spelling of their language to reflect drunken slurs.

Don’t worry about pronouncing the Portuguese correctly: just read it loud and in a drunk voice. They won’t understand you, but that’s because they’re too hammered themselves. “Vamos roller skating,” they’ll say in sympathy.

The Czar is also familiar with Brazilian cooking, being something of a grill-master himself. The Brazilian method of cooking is quite simple: subject thick cuts of meat—python?—to extremely high heat until the food is charred black on the outside and bloody raw in the middle. If you look carefully, you might find some medium-well fibers of meat between the two, but these will be utterly soaked in salt.

The heat is unbearable in Rio, but clothing is totally optional. Actually, the bigger and hairier you are, the less you want to wear. The Czar guesses for a mostly shaved Sasquatch guy your size, Jay, you should wear an eyepatch in place of a thong. Surprisingly, that won’t be the most surprising thing you’ll see someone wear.

Everyone talks about the gigantic statue of Jesus up on the hilltop, but what they don’t tell you is that, over the last 50 years or so, the statue has totally turned itself around so it looks away. It would be a Vatican-sized miracle, but no one admits it because it reflects nothing but shame on the city. Hey, if you had to gaze down on that mess, you’d at least squint.

Anywhere you go, look for the nearest exit and use it.

Fortunately, you’ll be traveling there with fiber optic cables, which is good because you can use them to strangle the hotel clerk when he arrives in the middle of the night to perform his customary turn down service and leave something minty on your pillow. Don’t worry about the body: murder is not only sanctioned there but positively encouraged. If the authorities ask, simply say what all Brazilians say and claim you thought he was a poor person. You’re off the hook, and you can just leave the body where it is. There will be no air-conditioning in your room anyway, and within moments his corpse will be swollen with bottle fly maggots, so dumping it won’t matter.

For the last 50 years or so, the Czar has become increasingly convinced that the Olympics are just a huge joke that we’re not getting…so the organizers are choosing even dumber locations each time. “Let’s pick a disease-infested pithole that’s corrupt, filthy hot, and has no transportation or clean lodging.” “How about Rio? Chicago said no.”