Illinois residents will be treated to a rare opportunity on June 2 to discover which of their neighbors are morons.

A network of anti-gun groups have planned a statewide event for Tuesday that will demonstrate the widespread solidarity of Illinois residents who want all firearms outlawed in the state. As you might expect, perhaps 100 people will be involved.

Here’s the gimmick: on Tuesday, June 2, anyone who believes the 2nd Amendments doesn’t exist is encouraged to wear orange in a visible place. Ideally, they want you to wear hunter orange, ideally camouflage. Fundraising shirts are for sale; the Czar doubts they’ve sold many. Prominent in this effort is the use of a symbol: an American flag, with blue and red replaced by orange.

A couple of thoughts.

The Czar gets to speak to and hear from many people around the United States, and knows that our fellow Americans are shocked to learn that Illinois is a very gun-happy state. Despite hard regulatory restrictions (Illinois was the last state to accept concealed carry, and makes obtaining the license fairly complicated), and numerous lawsuits about the constitutionality of municipal codes regarding ownership, the vast majority of Illinois residents are not anti-gun. Hunting is widespread in Illinois, and there has always been huge support for gun events ranging from shotgun competitions to IDPA-like self-defense shooting events.

Whenever an anti-gun rally is held, the pro-gun demonstrations dwarf the anti-gun crowd attendance. This isn’t Massachusetts: if you’re anti-gun, you will find Illinois a pretty hostile place. There’s a reason that MacDonald came from Chicago. 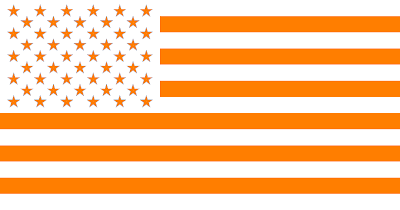 We’ll be watching for this logo tomorrow. Its ineffectiveness will likely mean it won’t be seen again.

So the anti-gun crowd wants their scattered members to know they aren’t as alone as they feel. They want to send a coded message out: anyone who wears orange on June 2nd is a “friendly” you can talk to outside of Facebook.

News media is sending out badly disguised messages. Over the weekend, the Czar spotted a local news channel doing a story on a recent gang-related shooting victim: the news story claimed that in honor of her memory as an innocent teenaged bystander cut down by gang fire, organizations are asking people to wear orange on Tuesday. Nope: that’s not the truth: that’s a cover story for what’s really going on. And it’s sad they’d promote the tragedy as such, but when you’re this out-of-support on your message, you exploit what you can, one guesses.

Actually, the Czar is eager for this “Hail Hydra” moment to find out which of his personal acquaintances are closeted anti-gun antagonists. The Czar, like so many of his neighbors, intends on making a mental checklist to see who’s wearing orange tomorrow.

In response, gun organizations are asking Illinois residents to wear camouflage, red/white/blue, NRA apparel, or gold (the color of the Illinois State Rifle Association’s IGOLD effort) to send a stronger message. The Czar supports this effort.

Both sides have been informed of the rules. Let the game commence.