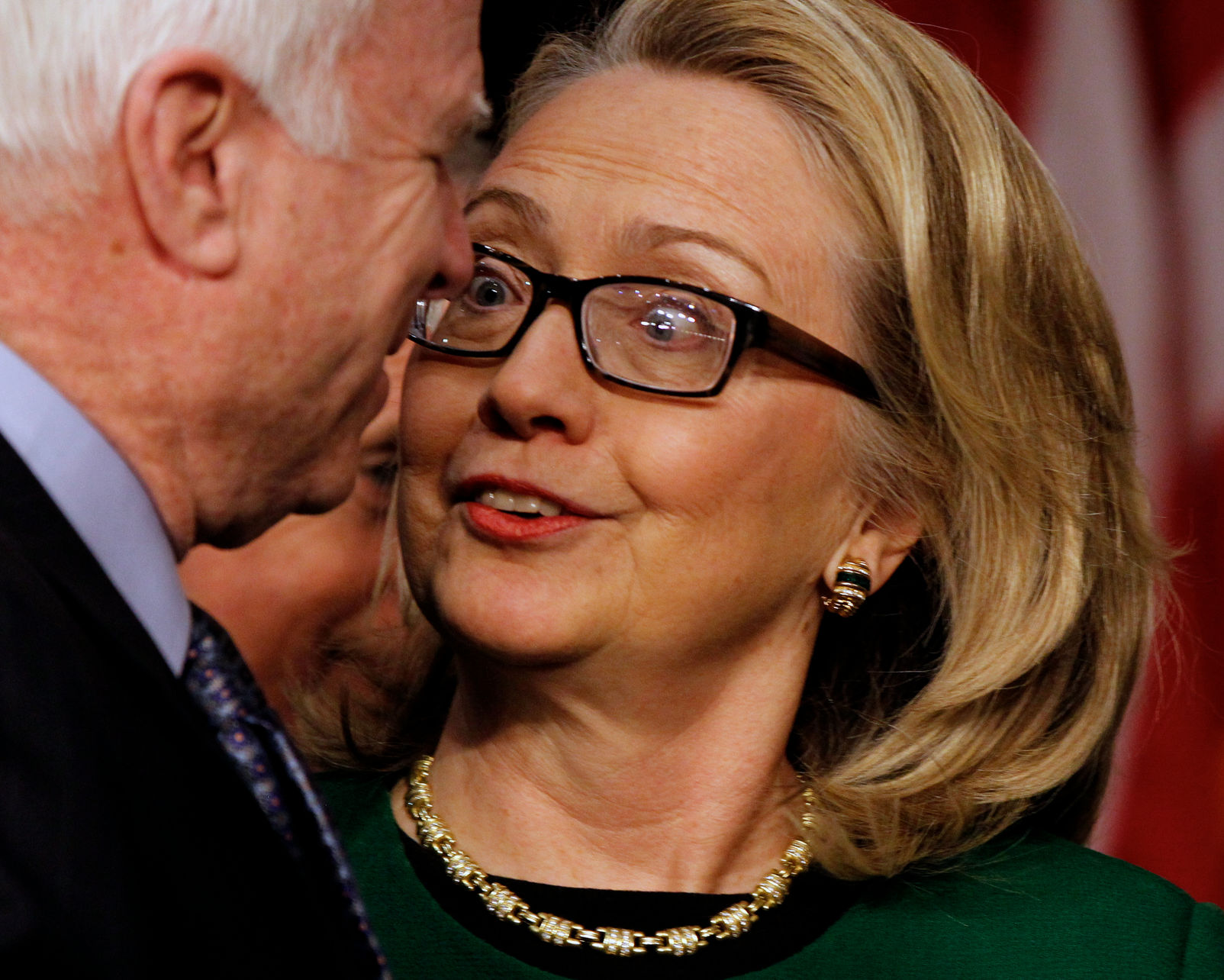 “Is that you, Jesus? My bad-brain-bleed-thingie makes it hard for me to see and to reason. What’s that? Wear more pantsuits? OK, Jesus.”

Hillary Clinton will surely be America’s next president, to hear media tell it. There’s no need for a general election, much less a messy Democrat primary. Accept your destiny, America, and move on.

Yet ‘Puter’s noticed the media’s tiny, black hearts aren’t fully in selling the lie. Media liberals were pleased to see Bernie Sanders enter the race,* hypothesizing his presence will pull Mrs. Clinton to the Left, where much of media dwells.**

Regardless, Mrs. Clinton is the odds on favorite to win the Democrats’ nomination, and thus Republicans must determine how best to beat her. Here are a few helpful suggestions, in case there’s anyone in the Republican party interested in retaking the White House.

Nominate someone who at least appears reasonable. This lets out Ted Cruz, Rand Paul and any and all human beings sporting the name Huckabee. Viable candidates include: Bush (hate him, but he’s viable), Walker and Rubio. Candidates that may have a chance include: Fiorina and Christie. Candidates that are dead on arrival: Graham and Palin.*** Your mileage may vary, but in ‘Puter’s experience, America will not elect a hard core conservative candidate. Quit your bitching and accept reality.

Don’t waste time going negative on Mrs. Clinton. First, plenty of surrogate entities will go negative on Mrs. Clinton for you, so don’t waste your money. Second, low information voters tune out attack ads, especially those focused on “America’s first [fill in name of minority/gender group here] president.” People have made up their minds about Mrs. Clinton. She’s been in the public eye longer than most living presidents. Tell America what you’re going to do, and how it will help them.

Radiate youthfulness and vigor. A Republican who appears fit, energetic and spry will cast Mrs. Clinton in a negative light without ever opening his mouth. America will see an angry, wrinkly, pant-suited grandmother and think, “Jeez, my Granny’s getting a bit doddering. Do I really want a grandma running the country?” All you have to do is stand next to her. America will notice the difference. America will recall (with a little help from PAC advertising) Mrs. Clinton’s past (?) blood clots and loss of consciousness, both conveniently timed to help her avoid the Benghazi hearings.

Be happy. No one wants to hear day in and day out how bad things suck. We all know things suck. Heck, even liberal Democrats know things suck. That’s why they’re not particularly happy with President Obama at the moment. Tell people how you will make American better, and be specific. People want real hope, not the ersatz Obama crap we’ve been fed for eight long years.

Don’t get hung up on social issues. If media asks (and it will), your first response should be:

“Social issues are important, but fixing the economy so average Americans have good, steady jobs and opportunity for real advancement is my primary concern. How about we talk about that first? Social issues don’t put food in your kids’ bellies or a roof over their heads. Once Americans are back to work and advancing, we will have time to deal with social issues.”

Assuming that answer doesn’t satisfy media (it won’t), here are some helpful pat answers for you to spit out when media attempts a “gotcha” question.

Explain to the middle class how you will make their lives better. This needn’t entail Democrat style taxpayer funded “free” crap for everyone. Simple things such as lifting business regulations and rationalizing tax treatment of small businesses would help immensely. Also, calling on states to end or curtail unnecessary business licensing schemes would help. ‘Puter’s pretty sure barbers and hair braiders don’t need to be licensed. People are capable of figuring out who does and who does not cut hair well and acting accordingly.

Speak to people who aren’t going to vote for you. Go to the inner cities and talk to hostile crowds. Explain how Republicans could make lives better. Go to a PTA meeting in Washington, DC and announce that not only will you keep the school voucher program, you’ll spread it city-wide. Every child will get a voucher, portable to any private or public school in the city or suburbs. Show Americans you’re there for all Americans, not just those on your side.

Stop demonizing banks and Wall Street. Banks and Wall Street are the engines of a capitalist economy. Without free flow of capital, the economy limps along, as we see today. Make clear you agree with Democrats that no institution should be too big to fail. Make clear you agree with Democrats that white collar criminals deserve prison time as much or more than their blue collar counterparts. Explain overregulation of banks, like overregulation of anything, means less credit available for Americans, particularly those at the margins. We like banks and capital. We don’t like and won’t tolerate criminals no matter where they may be found, and no matter how politically connected they may be.

Speak out forcefully against regulations that harm average Americans. The EPA’s new overreaching Clean Water Act scheme? Explain how it will let government bureaucrats regulate your bluegill pond because that water during an overflow may end up (in theory) thousands of miles away in a navigable waterway. The EPA’s anti-coal regulations? Explain how these will drive up the cost of energy precipitously and cost thousands of American jobs. Show people how nice-sounding regulations result in government control of their lives and wallets.

Speak out for immigration reform, and do so truthfully. We must effectively close the border, and this may mean issuing national identification cards for all Americans. We must make it painful for businesses to hire illegal aliens, including fines and possible jail time for repeat violators. We should not be looking to deport the 11 million illegals (or more) already here, so long as they’ve done nothing else wrong. If these (relatively) law abiding illegals can’t get jobs, they’ll go home eventually. Forbid any federal dollars to be used for benefits for illegals or their non-citizen children. Explain that if the border is shut, this all sorts itself out in one generation, because children of illegals born in the United States are citizens.

* Media’s collective panties get damp even considering the possibility Sen. Elizabeth “Pocahontas” Warren would enter the race, but that’s unlikely since the election falls between duninhdi and nvdadegwa, her Cherokee people’s Harvest Moon and Trading Moon. Sen. Warren’s wicked busy putting up her maize harvest for the winter then, and just won’t have the time to run for president.

*** Seriously, Palinistas. Stop trying to make Sarah Palin happen. She’s never going to happen. And stop the flame wars waged against anyone who says Mrs. Palin’s all about making herself money, because it’s the truth. Sarah Palin doesn’t care about you or your “cause.” Sarah Palin’s about Sarah Palin, and Sarah Palin only. It’s why she bailed on the people of Alaska mid-term.