Hey, high schoolers! Graduation is just a couple weeks away (or so), and you valedictorians are probably getting your speeches ready for the big day, right?

Well, stop, because your speech is awful. Let the Czar help you out. 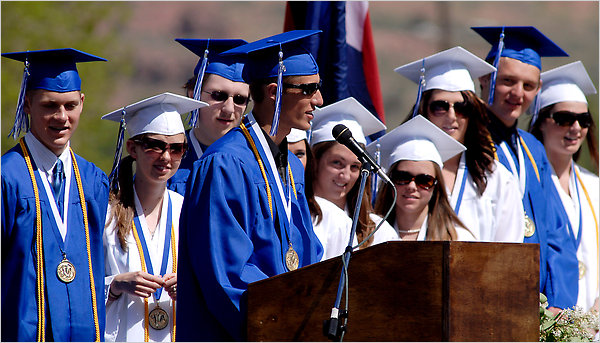 “Hey, remember that time Donny Hernandez stole Caitlin Prescott’s panties and hung them from the Prometheon projector? Dude, that was so funny! Caitlin, why are you crying? You didn’t know it was Donny?”

(Original photo by Richard M. Hackett of the The Longmont Times-Call)

If you start your speech quoting the dictionary—specifically with “Webster’s Dictionary defines…” the Czar will rip your head off. Let him guess: you’re either going to explain how your high school experience matches the definition, or ironically proves the opposite. How on earth did we know?!? Amazing, as if the Czar has heard this every year for the last century at least.

You should also be aware “The Road Not Taken” has been taken so many times that it’s officially the Road Way More Traveled. It makes all the diff-er-ence. A made up study confirms that more Americans have this poem memorized from high school graduation speeches than any ever before. If you read this poem to us, you’re a stupid conformist who plays it safe.

Not to say you couldn’t read a poem to the assembled masses. But when you do, please don’t read it in a sing-song lilt. All that shows is you have no sense of how to read poetry and are just trying to sound artsy. You wind up sounding like a toddler.

Glad that you’re a religious person. But that doesn’t make you a pastor: lengthy psalm recitations, or original prayers asking for some unfocused blessing, is like jamming needles under the audience’s fingernails. Thank God and get it over with: nobody wants to watch you pray anymore than they want to watch you brush your teeth up there.

Also, and this is pretty important—you’re not the only one graduating that day. So when you talk about how much high school meant to you, and how much you got out of your teachers, and how you’ll treasure them always, bear in mind that the crowd will either disagree with you or they’ll have no clue what you’re talking about.

Don’t make woo-woo-par-tay references. You are the valedictorian: you weren’t invited to any of those parties and everyone staring at you knows this.

Whenever you give a speech—now or in your future career—remember that the primary thought each audience member will have is “How much longer is this going to take?”

And leave your politics out of it. Just because you got a 3.87 on your GPA, you are not remotely qualified to lecture people three times your age on your politics, especially since five years ago you still believed in Santa Claus. If your political views in fact are correct, it will be more by coincidence than by anything you learned in the mean streets.

Your funny personal anecdote? Yeah, probably a stupid story that’s going to embarrass two teachers, the principal, and five students who will hate you forever. The audience will not share your whimsy, but they will share the awkward discomfort of the people you just humiliated.

Instead, suggest that everyone there thank their parents or guardians for all the patience and sacrifice they exhibited solely for your benefit. Putting a kid through school isn’t just a matter of money, but time and very often terrible frustration. Adults who live around high schoolers spent a disagreeable amount of time biting their tongues, or taking deep breaths. Freshmen think their parents don’t know everything. Sophomores believe they know it all. Juniors realize maybe nobody knows anything. Seniors begin to sense maybe their folks know more than they do. It all comes around—so thank your parents for, if nothing else, not beating you in your sleep with an aluminum baseball bat every night.

Offer your fellow graduates some advice about accepting responsibility for their own words and actions. Show them that the world out there is actually pretty nasty, and they might not be ready. In fact, they won’t be. But if they take a moment to remember just a little of what they learned in high school, maybe they can squeak past the real trouble and learn how to teach themselves to be smarter. Wisdom can start at any age; high school graduation is a great time to begin.