The Czar was interested to learn that Chipotle restaurants are no longer allowing guns on their facilities.

Illinois has legalized concealed carry, and there are now thousands of license holders throughout the state enjoying, at last, the last-denied Constitutional right. Not everyone agrees this is a good thing, and the Illinois legislature reasonably agreed that if a private property did not want a person carrying a firearm onto their property, they could post a “Please, no guns allowed sign.”

Pursuant to 430 ILCS 66/65 (d), the new law, the signs must be 4″ x 6″ in side—no larger and no smaller—and posted conspicuously at the entrances, visible from the outside. The symbol consists of a red circle and slash over a silhouette of a Beretta 92F, and the only words allowed on the sign are “Pursuant to 430 ILCS 66/65.” Indeed, the complete requirements are available on a PDF to assist property owners.

This is carefully explained to students taking Illinois’ concealed carry classes, a requirement for receiving the license. 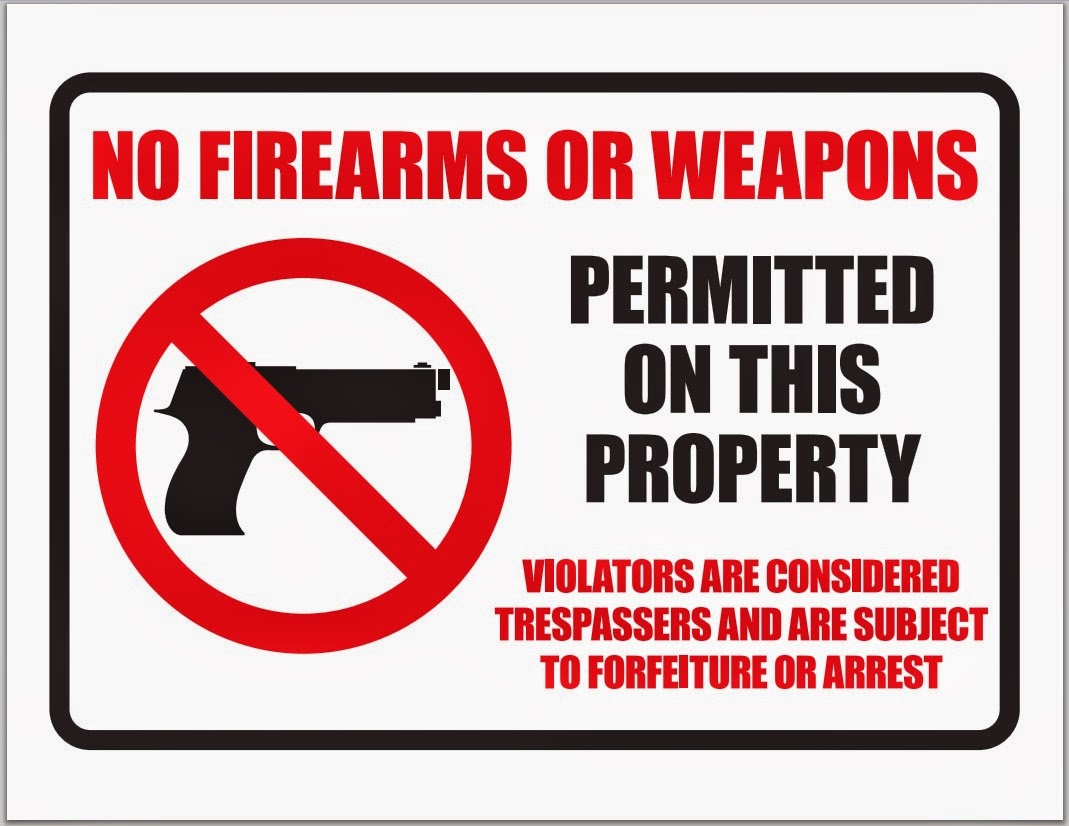 For example, this sign is invalid because the wording is incorrect. Additionally, the red circle must be 4″ in diameter.

Incidentally, the legal side also stipulates that any sign that fails to meet these requirements is invalid. This point is also covered in the concealed carry classes.

The upshot of the law is this: if a business owner or home owner posts a valid sign, you are supposed to return your weapon to your home or your car. Naturally, if you carry concealed, the property owner should never know you have a weapon, so if you elect to bring a weapon in past the sign, you take your chances. If you get caught by revealing, printing, or exposing the weapon, you can be charged with a misdemeanor for the first or second violation, and a felony charge (and loss of carry privileges) for the third violation.

On the other hand, if they post an impostor sign, the presumption follows that you can carry the weapon concealed onto the property until they ask you to leave with it. No misdemeanor.

So here’s the thing: a large number of businesses around Chicago are putting up impostor signs. Indeed, at the restaurant at which some of us dined on Monday, there is a large, letter-sized sign tucked into a far corner of the lobby. It shows a Walther PPK under the circle and slash with a whole paragraph of text explaining that Illinois criminal statutes require the display of a sign to warn concealed carriers about the law.

Everything about the sign, practically, is wrong. And this may be intentional.

If you are a gun control moron, a business owner presumes you know jack about firearms and what the laws actually say. Further, if you are a concealed carrier, you already know the sign is bogus and not applicable.

And this is rampant: one high-level CCW instructor and advocate who helped bring the law to Chicago confirmed for us that this is a popular game. If the sign is wrong, the owner probably knows it—particularly the more there is wrong with it. The correct signs are cheap, widely available, and even printable off the internet…so the primary reason to display a botched sign is a subtle and delightful code to Illinois’ thousands of armed citizens that their business is indeed welcome.