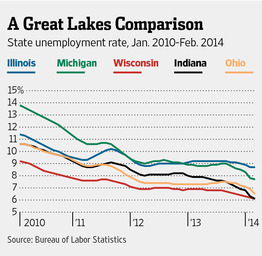 Darn that evil Scott Walker, ruining Wisconsin with all those ugly jobs!

If the states are laboratories of democracy, then a great comparative policy experiment is taking place in America’s Great Lakes region. Democrats in Illinois have been pursuing their blue-state model of higher taxes and union-dominated government. Neighboring states since 2010 have gone for lower taxes and union reform.

The comparison is especially apt because Illinois Democrats are doubling down on their strategy in this election year. Governor Pat Quinn has announced plans to make permanent the “temporary” tax hikes that were supposed to sunset at the end of this year. Illinois House Speaker Michael Madigan last month floated a 3% surcharge on income over $1 million, only to have it shot down by some in his own caucus. Yet Democrats are still flogging a progressive income tax, which Mr. Quinn all but endorsed last year.

All of which makes it an ideal moment to consider how the Quinn-Madigan policies are working.…