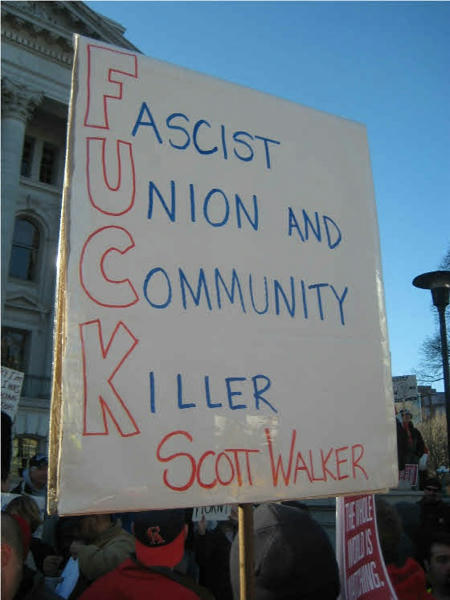 Have you chimed in yet about Unions and Wisconsin? I would’ve thought you’d be all over that. It seems like the typical union claptrap- take away anything from a union (especially something that isn’t there in the private workforce) and the world ends. I like how the news reports the numbers as if they’re a spontaneous thing instead of all the union bosses calling their people up to go protest (instead of work- must be nice).

Welllllp! Have a nice weekend. Watch out for the grappa.

‘Puter has been meaning to write in on the Wisconsin meltdown, but due to acute grappa poisoning has been unable. Until now. Thanks to JS’ tiemly reminder, and to this scaremongering and patently false Paul Krugman column, ‘Puter has decided to break his silence.

1. ‘Puter starts from the basic assumption, as reiterated in this space time and time again, that public sector unions are contrary to the interests of the people in that the unions are antithetical to an efficient and responsive service providing government.

2. The Wisconsin public sector unions made a massive mistake in not simply agreeing to the increased contributions to their exceedingly generous pension and health benefits in the first instance. In failing to do so, and in upping the ante by walking off the job (thereby alienating many parents of schoolchildren), the unions gave Gov. Scott Walker the opening to propose massively restructuring the relationship between government and union. Fools.

3. President Obama erred in tying his political future to a losing issue. Mr. Obama’s political arm, Organizing for America, went all in on the unions in this tussle. As did the DNC. As did every has-been liberal hanger-on everywhere. ‘Puter sees the odds that the unions succeed at less than 3:1. When your best argument is “Shut up and pay up. It’s for the children.”, you’re losing.

4. If ‘Puter were in charge of the Wisconsin Senate, he would introduce a separate bill enacting all of the proposed reforms to the Wisconsin collective bargaining laws, separate and apart from any budget bill. There are 19 Republicans in the Senate, out of 33 senators total. A quorum on a budget bill is 20 senators. A quorum for any other business is 17 senators. ‘Puter would hold a vote, stating that as the Democrats have abandoned their responsibilities, Republicans are going to take up everything that they legally can until the Democrats return or are replaced.

5. In a similar vein, ‘Puter yelled at the television this weekend every time a Democrat apologist said that Gov. Walker and the Republicans were taking away the right of public workers to collectively bargain. Let’s be very clear hear. There is no independent right to collectively bargain for public employees, save for state laws and a federal executive order. The laws that granted that right can be changed to take away that right, so long as due process is afforded. There is no allegation that legislators proposing a law, debating it in public, then voting on it does not comport with due process. Just because something disproportionately benefits you at the expense of others (a) does not make that thing a right and (b) does not prevent that thing from being banned.

Many of ‘Puter’s thoughts have been said more succinctly and more eloquently elsewhere. Feel free to find those places on your own. ‘Puter’s not going to drive other bloggers’ traffic.

Now, to Mr. Krugman. Today’s column is a target rich environment, chock full of unsupported liberal dogma. Where to begin?

1. If you start a column with an utter non sequitur of a slap at the evil trio of Beck, Limbaugh and Santorum (seriously, Paul?), you lose whatever credibility you may otherwise have with ‘Puter. So there’s two paragraphs of a fifteen page tantrum shot.

2. Mr. Krugman rehabilitates his credibility slightly when he admits (1) there is a real budget crisis in Wisconsin and (2) states that shared sacrifice is required. Mr. Krugman then stretches the truth to its breaking point in claiming that the unions are willing going along with the shared sacrifice he recommends. Mr. Krugman fails to note that no concessions were offered by the unions until it became clear that their illegal strike and hippie be/sit-in at the state capitol were not working.

3. While true that Gov. Walker has pushed through tax cuts for businesses, those tax cuts are intended to benefit the unemployed. Additionally, those tax cuts’ “cost” (‘Puter uses scare quotes because leaving money in taxpayers’ pockets is not a cost, it is simply not stealing more from them) is approximately $120 million out of a $3.6 billion overall budget shortfall. At best for Mr. Krugman, that’s three percent on a two year budget.

4. Mr. Krugman proceeds to describe the horrific destruction of public sector workers’ “rights” to collective bargain. First, as noted above, there is no right absent legislation to bargain collectively. Second, all public sector workers would retain the right to bargain collectively their wages; only work rules, pensions and other benefits are off the table. Third, public safety workers (e.g., policemen, firemen) retain full collective bargain rights. O tempora! O mores!

5. Despite Mr. Krugman’s unsupported claim to the contrary, there is ample credible evidence that public workers are in fact paid significantly in excess of private sector workers. Even the public employees working for the Bureau of Labor statistics disagree with Mr. Krugman.

6. Mr. Krugman next resorts to the tired liberal talking point that unions press for the political interests of their members, offsetting the advantage of Daddy Warbucks and the Military Industrial complex, who, together with their legions of leather-shod lobbyists are bent on oiling the machinery with the blood of the proletariat. How about this deal, Mr. Krugman? If you are so certain that public sector unions represent the political will of their constiuent members, how about making membership in the unions optional? ‘Puter didn’t think so. And that’s the difference between corporate lobbyists and union lobbyists. Those that fund corporations (shareholders) do so through a voluntary transaction (purchase of shares). Those that fund unions (members) do so through an involuntary transaction (closed shop rules, coupled with paycheck deductions). Apples. Oranges. Whatever.

7. Here’s a final thought question, in response to Mr. Krugman’s entreaty that we should all wish for an organization that represents the worker in the giant class war that is American quasi-capitalism. In what specific ways, other than forcibly taking more money from taxpayers to fund unsustainable union perquisites, have unions benefitted American workers in the last thirty years? How about the last fifty? It seems to ‘Puter that all the low hanging fruit (40 hour work week, 8 hour work day, unlocked fire exits, child labor laws, workplace safety laws) have all been harvested. Unions, like uncritical leftist though, is a vesitgal remnant of a once great American idea. And that, sir, is why you are wrong.

There. Now ‘Puter feels better. Back to the grappa.

* Bonus points to the first correspondent who correctly identifies the source of ‘Puter’s quote above. No fair Googling. And ‘Puter will know, because GorT’s hobby is to monitor each keystroke you make.