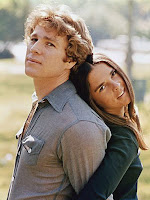 Erich Segal, author of Love Story, died this past week. Mr. Segal was born in New York City, became a product of Harvard University, and spent his career teaching at Yale. Mr. Segal had a successful career and long life. So what’s the deal ‘Puter? What’s your reason for bringing up Mr. Segal?

At the risk of running afoul of the age-old admonition de mortuis nil nisi bonum, ‘Puter’s got the following beef with Mr. Segal. Mr. Segal popularized (wittingly or not) an empty, hippified version of love in his novel Love Story.* Arguably, the most famous line from the film version of Mr. Segal’s novel was “love means never having to say you’re sorry.” Mule fritters.
‘Puter knows in the weed-addled, po-mo weakened minds of most hippies, love is never-ending bliss, and flowers and bell bottoms, and only the best Colombian, with The White Album on an endless loop in the background. But love isn’t easy. Love’s hard work, every day. Even when you don’t feel like working hard. Heck, especially when you don’t feel like working hard. Let’s face it. You, like ‘Puter, aren’t perfect, and never will be. Chances are, your spouse/life partner/slam piece of the moment isn’t perfect either. Thus, one of you is eventually going to screw up and righteously piss off the other.
And when you do piss off your partner, contrary to Mr. Segal’s dreamy philosophy, love means saying you’re sorry. A lot. And meaning it. Jebus, if ‘Puter didn’t apologize — and sincerely — for all the stupid things he’s done/said/eaten/brought home, Mrs. ‘Puter would’ve left long ago. ‘Puter bets its the same in the marriages of his fellow Gormogons, as well as the relationships of his readers.
Mr. Segal popularized the existing hippie notion that love is easy, and true love always leads to perfect relationships and marriages, without any additional work required. And that, Gormogon operatives, is ‘Puter’s beef with the late Mr. Segal.
*’Puter also blames Love Story for the explosion of girls named Jennifer born in the early 1970s. Heck, ‘Puter recalls about half of his classmates were named Jennifer, and that’s excluding the girls. On the upside, it makes one night stands with women of a certain age a little easier, as you’ve got about a 50-50 shot going with the name “Jennifer” the next morning.