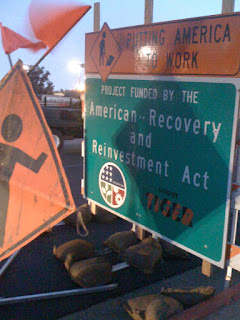 Given the recent setbacks failures that the democrat party has experienced, what can we look forward to in the coming months from them in order to preserve what they can going into the 2010 elections?  Well, the Czar points out a few of the changes coming.  And later this morning, I’m sure we’ll hear from a number of democrat talking heads about what the future holds with Senator-elect Brown’s win.  I’ll go out of a limb (which is probably a reinforced titanium girder but nonetheless…) and say that the mantra moving forward from the democrats will be about the economy and jobs.  I’m sure they would like to re-use the catchy phrase, “It’s the economy, stupid” but the GOP has more claim to that given the democrats have controlled the purse strings in congress for the last 4 years and the thrust of costly new programs has been led by the President.  The republicans need to be able to respond – and better to do it in a proactive manner – over the next 10 months to this mantra.

Some of the salient points: Recovery.gov is still reporting 640,329 jobs “created or saved”.  We know that number is inaccurate even by the White House’s own admissions….twice.  There is no mention on the site that touts that it is the means for public review of the stimulus money of any fraudulent attempts to use the stimulus money – a point I find hard to believe hasn’t occured in the last 9 months.  With the reported data being 3 months old now and running into sharp criticism over the accounting behind the numbers, the OMB released a memo updating the method of counting jobs for the period starting January 1st, 2010.  Of course, they won’t go back and revise the numbers.  Second, watch them make the numbers cumulative.  Basically, the numbers will reflect hours worked by an employee using stimulus funding on a per quarter basis but blurs any distinction behind the numbers:

So if a job already existed and was funded by the Recovery Act several months ago (and therefore reported in the 640,329 number) but then is funded in the first quarter of 2010 by the Recovery Act, it is likely to be re-counted.  The memo also states:

In addition, the new guidance eliminates the distinction between a job created and a job retained.

Can someone show me where that distinction was shown on Recovery.gov prior to this memo?  All I see is 640,329 jobs “created or saved” – there is no distinction made even though one is implied by this new guidance memo.  So watch the democrats spin and wield this as “evidence” that they are improving the economy.

Of course, at the same time you have reality – union membership has dropped 10% in the private sector over the last year (yes, the ‘Puter is dancing a jig in the corner as we speak).  The Labor Department reported that unions in the private sector lost 834,000 members over the last year, largely in the construction and manufacturing sectors.  This is a tough blow as when the economy rebounds, unions aren’t likely to recover those numbers – at least not at the start nor at the pace of growth.  So while the democrats are likely to refocus on jobs (I’m hesitant to say “job creation” as I don’t think they really know what that means), it is unlikely to become reality for a large democrat backing voter block.

To bring the post full circle from the title, the people’s response to the democrats should be “We Won’t Get Fooled Again“.