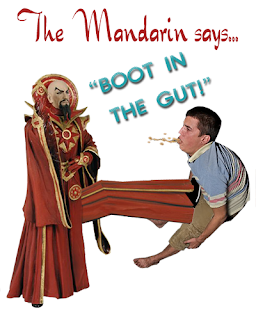 As we come to the close of the year, your Mandarin has a special treat for all of our loyal visitors – The Mandarin’s 2009 Boot in the Gut award (referred to affectionately here at the castle as the “Bootie”).

And what fine organization or person is this year’s recipient? Well it is none other than the International Brotherhood of Teamsters and the SEIU for their fine efforts to block blood delivery in an effort to get increased wages for unionized Red Cross employees as reported by Liberty Chick at BigGovernment.com.

This strike is not just some mere inconvenience where you get Scabby the Rat sitting in front of your establishment, this strike is interfering with the delivery of vital medical products. According to the article, “the Red Cross says it had to inform union members that a two-year-old child’s life depended on our blood delivery before they would allow a Red Cross vehicle to exit the yard to get the necessary blood products to the hospital.”

The union insists that this is not about increased pay for their members, but an effort to address unsafe and unfair labor practices. The Red Cross’s rebuttal to this argument is that if this were the case, then why have no unfair labor practice complaints been filed? It is nice to know that the union’s true colors are on display for everyone to see – Screw you as long as we get what we want.

Between this and the previous story I commented on regarding the union’s objection to an Eagle Scout performing a service project in a public park, this boots for you. Wear it in good health!