Well, the POTUS is down in nearly every poll. But so what, counter his supporters, Reagan had a godawful first year in terms of popularity.

Yes, that is quite true. But as bad as Obama?

Well, let us look at the first year of every president from Truman forward. Where did they come in, and how did they end up in 12-ish months? 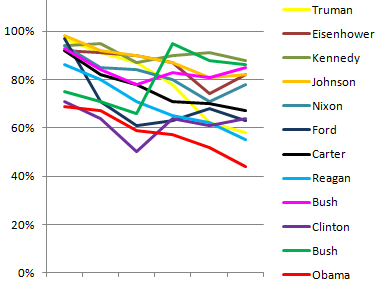 That’s Obama, there in red. He entered office with the lowest popularity of any president. And while Clinton took an initial skid only 6 months in, he rebounded. As you see from Obama’s red line, he has steadily sunk in popularity to where he is the most unpopular first-year president in approval rating history.

And yes, while Reagan had a bad first year, he never fell as bad as the current President. Basically, all presidents have a bad first year (except George W. Bush, who soared in popularity due to September 11, 2001, which the Czar is certain he would trade to have those lives back), but take a look at that crashing red line.

Do you think the President gets it? Do you think he understands what this means? Is this a B+ president?