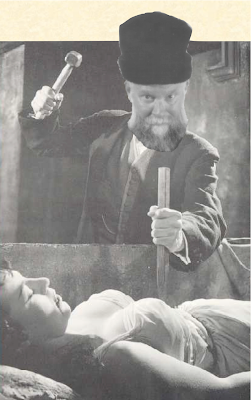 Not to step on the Czar’s (nine) toes, and freely conceding his vastly superior knowledge of and first-hand experience with impaling peasants au Ţepeş (or indeed, with his reverse mouth-first style known that’s made him famous from Muscovy to Kazan to the Khanate of the Crimea), but Confucius* is the Gormogons’ expert on vampires, frequently having to explain to the difference between himself and them to garlic-and-crucifix-wielding morons. To paraphrase an old joke, “Oy vey, have you got the wrong vampire.”**

We won’t go into how an immortal sorceror differs from a verminous undead revenant or how to deal with the lesser-known breeds of phlebodegmists (hopping vampires, jenglots, pontianaks, manananggals, etc.). For that, you’ll have to buy my book.†

But, just to note: dealing with your standard Southeastern European vampyrus draculensis, you don’t want to rely on the stake—which should be wood, incidentally (ash if you can get it). That just immobilizes the S.O.B. Unless you’ve staked him to a chaise longue poolside at the Bellagio, you haven’t solved your problem permanently. Sure, he looks all dead and dessicated, but he ain’t. If you don’t want to wait for sunrise—and believe me, you don’t want to wait for sunrise—you need to stuff his mouth with garlic, cut off his head, and burn the body. The skull you can keep as a souvenir. Stop by Castle Gormogon sometime, and you can see the Volgi’s vampire tzompantli. It’s in a locked vitrine right now, as the Mandarin was using it as an abacus and the Czar and ’Puter were taking whole rows down to the rumpus room, stringing them on clothesline, and using them as the wire for their eight-ball tournaments. (Who’s better? Who the hell knows. Sleestak’s always bitching about having to drag them up the lengthy spiral staircases unconscious. Apparently they play their own “one travel-mug of schnapps per ball” variant. Dat Ho keeps a mop and pail down there. GorT claims he can’t smell the vomit smell permanently infused in the felt, but Metal Man’s got no nose.)

Wait, what was Confucius says-ing? Right, vampires. Get a grip, mortals. They’re parasitic, predatory scum. Sure, they clean up nice if you give ’em a tux, and some of ’em are smart enough to avoid detection for a while (but they have to hole up in West Goatf—, Transylvania, and the like), but they’re not some brooding romantic Gary Oldman, get-a-room-funboys like Pitt & Cruise, or some “hey, baby, I’m six hundred years old” teenage-looking chickenhawk with a fondness for body glitter. They’re ticks. Evil, smart ticks. Do your bit for humankind and kill as many as you see.

** The line seems to come from this movie by everyone’s favorite child-sodomizing director, though Confucius first ran across it in a cartoon in a 1970s-era Playboy, if memory serves.

† Alas for you, all known copies were burned by Ch’in Shih Huang in 223 B.C. Lucky for you, six survived.