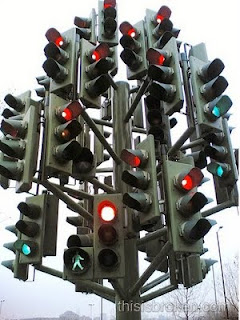 GorT has been suffering through nightmare commutes the last two days.  My 20-25 mile commute generally takes about an hour in the evenings.  It took two and a half hours tonight.  For those not in the Metro DC area, you might not have heard that a computer system that maintains central control of traffic lights in Montgomery County, Maryland, crashed early Wednesday morning and thost in charge have yet to remedy the situation.  Most of the headlines or leads that I’ve read in the WaPo and other sources hint towards the fragility of our lives as we’ve become dependent on technology.

This misses the point.  Let me walk through a few that are seemingly overlooked:

First, the system that crashed was put in place in the 1970s (maybe early 80s based on some reports).  It might be ready for an upgrade.  I actually find two things a bit exceptional here – the Y2K hysteria didn’t target and replace this system and it still has capacity for the amount of growth here.  More on the latter later.

Second, the government should have had a better plan in place for an IT system that is at the heart of traffic management for an immediate suburb of the nation’s capital.  While the system reportedly has a backup system, the system failed at a point where there was no backup.  There are solutions for this.  This country has numerous systems which are more fault tolerant.  There are technologies that enable this with relative ease.

Third, the previous two points beckon the question of whether this was just mismanaged between the contractor and the Montgomery County Council (as a side note, this is the legislative body that runs the county with the County Executive and with little exception, it’s been a single party (democrat) representation for years and years) or whether it was a shortage of funding for the system.  County Executive Ike Legget is pushing for the $35 million, 6 year program to be accelerated based on the events over the last few days.  Hopefully the majority of that six year program is the operations and maintenance of the replacement system.  Six years is way too long to develop an IT system as much of the technology will be outpaced by new technology at least once and maybe twice.

Last, why have these democrats spent our taxpayer money on speed cameras, curb improvements, and minor repaving projects when we have this lurking problem?  Couldn’t some of the stimulus bill be better spent on more critical system updates?  Our democrat County Exec’s mitigation plan to ease the pain on commuters was to offer free rides on the Montgomery County bus transit system.  Great.  Given the large percentage of us that commute across multiple jurisdictions, this does little good.  And buses are just as susceptible to the traffic management issue.  Luckily it sounds like the contractors have been able to fix the system this evening.