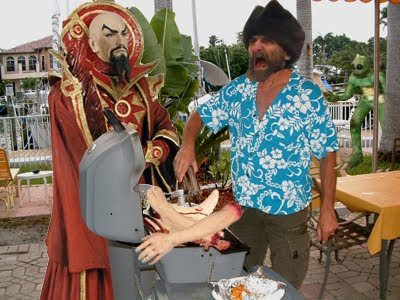 The Czar has got his grill back!

Not particularly well known: the Czar is a die-hard griller, who has done everything from Thai beef salads to South American pork tenderloin to Korean shrimp to bourbon-glazed chicken. And his corn is without equal in the world.

It was with considerable horror earlier this summer that his venerable grill perished in a terrible conflagration after ten years of loyal service. The poor thing just got worked to death, and a gas line failed resulting in a tremendous fireball. It died as it lived: in flaming glory.*

The Czar sought to replace it with the same model, as the Czar was quite delighted with his Char Broil grill, up until it exploded.

And this weekend, taking advantage of the late Fall clearances, he bought a gorgeous, even bigger stainless steel monster for 50% off, new. And the Царевич most definitely helped putting the screw and washer assemblies together just as fast the Czar could screw them in. He will most surely be rewarded with a hot dog.

Above, the Czar celebrates at the Castle Gormogon as the Mandarin offers sagacious counseling. GorT would later join us five minutes before this picture was taken (this is the kind of weird phrasing you find yourself using with a time traveler), and as for ‘Puter, he elected to marinade himself before dinner was ready. You can just make out his servant running to get help. And the Volgi joined us in spirit (literally—hovering over the table) as for complex reasons he can only eat essence of Chinese ginger** for the next 30 days as a powerful defense against the sorcery battle he remains locked in.***

* ‘Puter’s nickname in high school. Yes, yes, we all know this. Focus, people.
** Sigh. Yes, we know this was his name in grade school. Can you please stay with us?
*** Next up: he challenges his opponent to Mystery Date of Death!