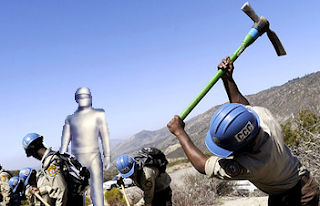 The White House and democrats are poised to start crowing about the success of the American Reinvestment and Recovery Act of 2009 with data showing 650,000 jobs “created or saved”.  This number represents about $150 billion of the $339 billion spent through September 30th.  It does not include individual grants (i.e. Pell grants) or grants of less than $25,000 per individual (which I believe to be flawed as several states are tracking individual jobs “created or saved” for items under the $25K mark for single job savings results).  Of course, the government has already been caught with errors in these reporting numbers and the term “created or saved” is a bit nebulous to begin with.  We’ve covered this before here at the Castle.  Note – remember the initial forecast of 3 to 4 million jobs saved?  The “new’ target is 1 million.  With 150,000 jobs “created or saved” by the end of May, that means that an average of 125,000 unique jobs were “created or saved” each month through September.  During those same months (May through September), the national unemployment rate rose from 9.4% to 9.8% (and some reports have it hitting 10% in October).  I love math and numbers, but you can make numbers say just about anything you want them to provided people ignore the units of measure, the comparisons made or the basis for the derivation of the numbers.  This is exactly what I think is going on with the bogus measure of jobs “created or saved”.  There is no way to accurately measure whether a job was created or saved due to the stimulus bill aside from the direct grants which the government is saying is NOT included in these counts.

Let me point at some local examples of the stimulus money in action.  Note, you can go here for links to research your own state.  On my 25-mile, 40 to 90+ minute commute to or from work, I’ve passed a number of road construction jobs with signage indicating that this project was funded by the stimulus program.  These are present in the three jurisdictions I pass through: Maryland, Virginia and the District of Columbia.  They have been as small as sidewalk repair or the addition of ramps to sidewalks at intersections to larger projects like road resurfacing.  However, with a few exceptions, I doubt that many of these projects would not have been undertaken regardless of the stimulus money.  Road and sidewalk maintenance is a constant budgetary item for states as reliable roads and sidewalks are required for good commerce and safe citizens.  One particular project just wrapped up and the resulting road is a patchwork of old and new resurfacing looking like a concrete quilt.  This road seems to be under construction for potholes, flooded drains or crumbling curbs every 6 months.  One would think that with all this stimulus funding, D.C. could now fix the road more permanently to avoid the costly project startup, repair and return that the road has experienced in the decades that I’ve been driving upon it.  In the end, much of the stimulus is a bailout of states – funding jobs that were originally targeted by state budgets.  On a side note, of the $16 billion reported by agencies of contract awarded stimulus funds, almost half were awarded in a non-competitive, non-fixed price manner.  This includes sole source jobs and jobs directed to a particular vendor.  These types of awards are perilous as the possibility of fraud and/or shady dealings are much easier within their terms.

Finally, as mentioned above, I live and work in a city with a top 3 commute time.  If local administrations want to really have an impact with the stimulus funding, then they would apply it to real traffic problems.  I’m not disputing my previous point that sidewalk and road repairs are necessary and for state and local road, these should be funded from state coffers.  However, the master plans for the DC metropolitan region in the late 1950s and early 1960s had 5 or 6 bridge crossings between the Key Bridge (near downtown DC) and Point of Rocks, MD (where U.S. Route 15 crosses the Potomac River).  Today we have two: the American Legion bridge (where I-495 crosses) and Chain Bridge (just inside the District line from the American Legion bridge).  While there is a lot of political hurdles and NIMBY-ism to overcome, the plans had additional crossings.  When we have a single accident on one of the major arteries in the area, traffic snarls large parts of the region.  Add to that inclement weather and a large population of non-locals many of whom aren’t confident drivers in the rain and snow that we get here and it’s a recipe for disaster.  Simply put, if you chart the number of road-miles (paved road surfaces) per capita, the DC metropolitan region is woefully lacking.  Urban demand for automobile transit is outpacing road growth by over 35% in the area.