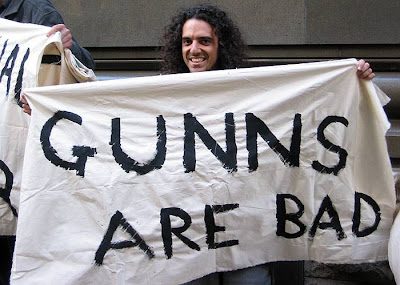 The United States Supreme Court agreed yesterday to hear the case of McDonald vs. Chicago. This case seeks to overturn Chicago’s 27 year-old ban on handgun ownership.

Of course gun rights advocates are elated that the SCOTUS is going to hear the case and possible over-turn the ban. On the other side of the argument are those that are in histrionic overdrive that guns may be allowed in their fair city – they must be oblivious to the fact that this handgun ban in effect since 1982 has done nothing to curb violence in the city.

Some of your Mandarin’s favorite excerpts from the article illustrating the anti-gun advocates’ distress over this development are:

City officials said in a statement that they stand by the handgun ordinance, which was implemented in 1982 to combat urban violence.

Supporters of handgun prohibition warned that striking it down eventually could lead to residents and tourists walking legally armed along Michigan Avenue.

“What the gun (proponents are) really more interested in is trying to use this so that it will allow people to have guns on their person in public places,” said Thom Mannard, executive director of the Illinois Council Against Handgun Violence.

That’s right gun proponents want nothing more than to turn Michigan Avenue into a 21st century O.K. Corral. Next thing you know people will be shooting each other over a pair of shoes, neighborhood turf, or just because someone looked at them the “wrong” way. Then again this happens now in the city, but at least it is not with a legally owned handgun.

This progressive/leftist idea that the citizens of this country should not be allowed to own a firearm is insidious in the effect that it has on this country. First, it plays right into their belief that it is the responsibility of the state to protect its citizens, and that the individual should not be allowed to usurp this authority. Second, and this may sound a little conspiratorial, but this handgun ban has only benefitted the criminals. In the progressive/leftist “white guilt” mentality, the white man should no longer be able to defend himself against those minorities that are now taking what they have been deprived of in the past. Again the irony is that this is being accomplished at the point of a gun, and the majority of the crime is not minority-on-white, but minority-on-minority.

If the city of Chicago and all of the anti-gun advocacy groups were really serious about reducing violence, they would not deprive law-abiding citizens the right to own a gun. Rather, they ought to prosecute those criminals that violate the approximately 10,000 gun laws across the country to the fullest extent of the law. But then again it is always preferable for the cowards to go after those least likely to resist (law abiding citizens) than some gang-banger that has nothing to lose and some street cred to gain.