↓
Home→Uncategorized→Can I Get That Beer In A Sippy Cup? 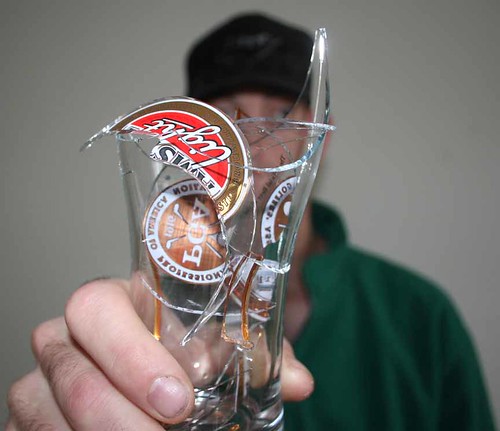 Your Mandarin was perusing his November 2009 issue of the American Rifleman magazine this morning and came across this news brief:

Back in 2005, after an article in the British Medical Journal called for a ban on pointed kitchen knives throughout Great Britain, some asked what might be banned next: cricket bats, axes, or butter knives? Now, the British Home Office has managed to outdo those expectations. In a move sure to make armed citizenry proponent and brewer Samuel Adams roll over in his grave, the Home Office’s new target is the pint glass.

As part of the nationwide “Safe. Sensible. Social.” Campaign, the British Home Office has commissioned a new, “safer,” pint design, meant to replace the traditional pint glass that officials complain can be used as a weapon. Many in the pub industry expect the new design to incorporate shatterproof plastics, which would change the feel and experience pub customers desire. Pub owners are also worried about the inconvenience and cost the switch could impose on their businesses, particularly during the current recession.

Others in the pub industry have questioned the need for such drastic measures. The BBC reports that 126 million pints of beer or ale are served each week in the UK, while the Home Office reports crimes involving bottles or pint glasses amount to only 5,500 per year. One pub owner even suggested an alternative to help curb violent crime, stating, “Surely the Home Office needs to make the police use existing legislation and lock up the violent offenders?”

Those keeping track of Britain’s “progress” might find it interesting that even George Orwell could not predict how far the British government would go. In the totalitarian Britain of Orwell’s 1984, even the lowly “proles” were trusted to drink beer out of actual glasses.

Your Mandarin wonders, does someone in the Home Office have stock in a company that makes plastic cups? This is the classic leftist/progressive tactic of confusing the masses with motion instead of action. And where are all the environmental groups bemoaning the use of all this plastic and the release of that deadly plant food CO2?

Oh well, I guess that old song by the Kinks has come to fruition – there is no England now.