↓
Home→Gordon Brown→Yes, Send a Clue ‘Round For the Prime Minister, Please? 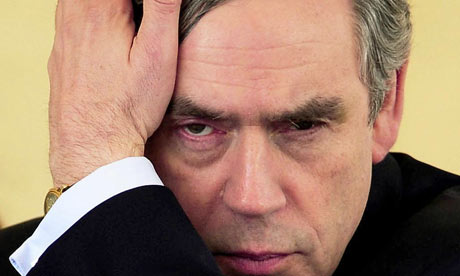 After more than a decade of powerful rule, the Labour party looks to have its buttocks smartly thumped by Conservatives in next year’s election.

What do you do to win the hearts of the British voter? You announce tougher anti-social laws, of course!

The country is in a bad state: crime is increasing dramatically, critical infrastructure systems are broken, and the US treats you like an odd-smelling distant cousin. Brown intends to fix that by cracking down on bad parenting and teenage binge drinking.

On the parenting issue, it will now be the government’s responsibility to enforce good parenting, not limited to a parenting contract, with mandatory interventions for the top 50,000 most chaotic families (no doubt identified by a complex matrix of chaos quality factors). In accounting that should sound painfully familiar to angry American voters, this will cost £50 million in real currency, but save £3 billion in fairy currency over time by magically lowering the need to pay out welfare and crime damage costs. Yes… the fact that the soaring unemployment will cost £50 billion in unemployment dole payments is more acceptable. Excellent use of government focus and resources, Mr. Brown.

And the sheer magnitude of teenagers drinking alcohol will not escape his liberal fury, either. Get busted committing a crime while hammered, and you could suffer a national drink banning. Good luck getting into pub now, eh Jackie? That logic of course sounds familiar to American gun owners: one might suppose that the folks tearing up your citizenry with violent crimes probably aren’t hatching their plots sitting over pints of Newcastles at the Rowdy Lion. They probably aren’t even old enough to get alcohol.

Madness. Absolute madness. Well, the Czar congratulates the Conservatives on another deserved win.