There’s an on-going discussion on H.P. Lovecraft at NRO’s Corner which paints a partially correct view of H.P. Lovecraft, but completely misses out on Lovecraft’s dismal and vicious politics. John Derbyshire quotes Sam Francis as calling HPL “one of America’s last free men.” Free he might have been, but through no desire of his own. Lovecraft wanted Authority to impose order on the chaotic universe he perceived through his atheistic materialism, and would have gladly abolished democracy in America.

At the beginning of the discussion, John J. Miller describes HPL as a “socialist,” which is probably right at the time of his death, which comforts his left-wing admirers who often see it as a repudiation of his “conservatism,” but he took an ugly road there and his so-called “conservatism” was not a desire to conserve the achievements of the Founders, but a circumlocution for something much worse. HPL slid from what looked like national socialism to international socialism in a characteristically easy fashion. (“Last year, it was all Lenin in here!”)

Years ago, your Volgi ran across a letter in Lovecraft’sSelected Letters in which he was making the classic 1930s case that democracy had failed and had had its day, so we needed to replace it with a strong leader, and Science, etc. etc., and got a distinctly fascist vibe from it.

Temperamentally, HPL was sort of the classic petty intellectual and eccentric crank who threw in with technocracy and nostalgic romanticism (born in our age, he’d have been a Perot and Buchanan guy, I suspect). Lovecraft is a perfect example of a “smart guy” who—like lots of “smart guys” in the 1930s—fell for the modern, effective, scientific aura of fascism.

Pace Derb and JJM, HPL was no “traditionalist,” except in a very qualified sense. He wasn’t so much the kind of guy in for perpetuation of tradition but of restoring lost glories, for fleeing modernity into an imagined, romanticized past. This is classic fascist material. He was sort of a “conservative,” but in the reactionary, European, blood-and-soil, throne-and-altar sense, except translated into an Anglophilic Protestant New Englander idiom. (He was not a fan of the Founding, the Constitution, etc.) In politics, as in the philosophy underlying his works, Lovecraft is not a profound or systematic thinker, he is an almost-brilliant, well-read crank with a painful perception of the nihilism and meaninglessness—the “cosmic horror”—that his atheistic materialism dictates.

Even though he had (and loved) a Ukranian-born Jewish wife, Sonia Greene, he definitely had his period’s retrograde attitudes towards non-WASPs and non-whites—to an unusual degree. His crazy went to eleven. Sonia (who often had to remind him that she was Jewish when he’d start in on the Jews) said he would always get enraged at the racially diverse crowds in New York (as opposed to his native Providence). “The Horror At Red Hook” is, well, immigrants. “The Shadow Over Innsmouth?” Miscegenation. And “Arthur Jermyn” had a allegedly Portuguese grandmother who was actually a gorilla. Much more akin to the profile of national socialism or fascismo, I’ve always thought. He was not a Nazi, obviously, and he loved his Jewish wife (and she him), although he seems to have been a pretty committed anti-Semite (and bigot) in theory.

These Wikipedia bits are pretty spot-on.

Lovecraft lived at a time when the eugenics movement, anti-Catholicism, nativism, and strict racial segregation and miscegenation laws were all widespread in the United States and theProtestant countries of Europe, and his writings reflect that social and intellectual environment.

Textbook Progressivism, anyone? (Or Liberal Fascism, if you will.)

Ethnicity was more salient than race for Lovecraft; he admired Anglo-Saxons in particular, not white people generally. Non-Anglo-Saxon whites of European descent are frequently disparaged in his work on ethnic grounds. The degenerate descendants of Dutch immigrants in the Catskill Mountains, “who correspond exactly to the decadent element of white trash in the South”[13], are common targets. In “The Temple,” Lovecraft’s highly unsympathetic narrator is a German World War I U-boat captain whose faith in his “iron German will” and the superiority of the Fatherland lead him to machine-gun helpless survivors in lifeboats and, later, kill his own crew, while blinding him to the curse he has brought upon himself.

Well, who doesn’t hate the Dutch?

And this ugly piece, with strong Nazi and white-supremacist sympathies attempts to enlist Lovecraft as a race warrior, and scummy though it is, its thesis is argued, not too selectively from a lot of HPL’s own words:

The celebrated British philosopher, Colin Wilson wrote of Lovecraft in The Order of Assassins (Rupert Hart-Davis, London, 1972): “The underlying spirit of Lovecraft (is) the revolt against civilisation, the feeling that the material success by which the modern world justifies itself is the shallowest of all standards; like Nietzsche, he felt that democracy is the rise of botchers and bunglers and mediocrities against the superior type of man.”

…
It might be added that Lovecraft’s conception of the “superior type of man” was not based upon class or wealth (he despised commercialism in its every form and in later years came to despise Capitalism and its materialistic values with as much ferocity as he despised Marxism and its materialistic values). Lovecraft’s view was basically that of the racial nationalist.

Although a life-long Anglophile he opposed the First World War, basically because it was a brother’s war. As he explained:

“That the maintenance of civilisation today rests with that magnificent Teutonic stock which is represented alike by the two hotly contending rivals, England and Germany… is as undeniably true as it is vigorously disputed. The Teuton is the summit of evolution. That we may consider intelligently his place in history we must cast aside the popular nomenclature which would confuse the names “Teuton” and “German”, and view him not nationally but racially. Tracing the career of the Teuton through medieval and modern history, we can find no possible excuse for denying his actual biological supremacy. In widely separated localities and under widely diverse conditions, his innate racial qualities have raised him to preeminence. There is no branch of modern civilisation that is not his making.”

From this it is clear that Lovecraft had a realistic appreciation of the overriding importance of race. Although he seems to have always felt this instinctively, his views were hardened by several years spent in New York in the 1920’s where, for Lovecraft. the race problem assumed “its most hideous form as loathsome Asiatic hordes trail their dirty carcasses over streets where white men once moved, and air their odious presence and twisted visage and stunted forms till we shall be driven either to murder them or emigrate ourselves… It is not good for a proud, light-skinned Nordic to be cast away alone amongst squat, squint-eyed jabberers with coarse ways and alien emotions whom his deepest cell tissue hates and loathes as the mammal hates and loathes the reptile, with an instinct as old as history.” The strength of Lovecraft’s feelings were rarely far from the surface when he wrote of the race issue, as when he had this to say about New York: “The city is befouled and accursed – I come away from it with a sense of having been tainted by contact, and long for some solvent of oblivion to wash it out! How in Heaven’s name sensitive and self respecting white men can continue to live in the stew of Asiatic filth which the region has become – with marks and reminders of the locust-plague on every hand – is absolutely beyond me.”

Lovecraft’s anti-semitism, it should be noted, was not based upon a well-researched knowledge of the part played by certain wealthy Jewish financiers, but on plain physical repugnance. The limitation, therefore, of his appreciation of what motivates Zionism, which he never mentions, is considerable. In his view “the mass of contemporary Jews” were “hopeless so far as America” was concerned because they were the “product of alien blood, and inherit alien ideals, impulses, and emotions which forever preclude the possibility of wholesale assimilation… The fact is, that an Asiatic stock broken and dragged through the dirt for untold centuries cannot possibly meet a Nordic race on an emotional parity.” So far as he was concerned “on our side there is a shuddering physical repugnance to most Semitic types, and when we try to be tolerant we are merely blind or hypocritical. Two elements so discordant can never build one society – no feeling of real linkage can exist where so vast a disparity of ancestral memories is concerned – so that wherever the Wandering Jew wanders, he will have to content himself with his own society till he disappears or is killed off in some sudden outburst of physical loathing on our part.”

The discussion so far has avoided S.T. Joshi’s analysis of HPL’s Hitler fandom (pp. 360-362)—shared, remember, by lots of intellectuals before the war and the Holocaust stripped the mask from the monster.

Joshi’s sympathies are on the left, if the Volgi remembers right, and in the first paragraph he’s trying to extricate HPL’s later more explicitly New Deal-Henry Wallace Progressivism from his hideous racism and attraction to Hitler. 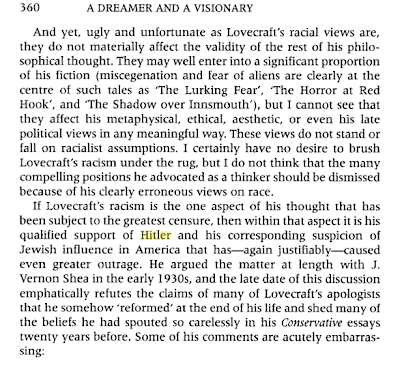 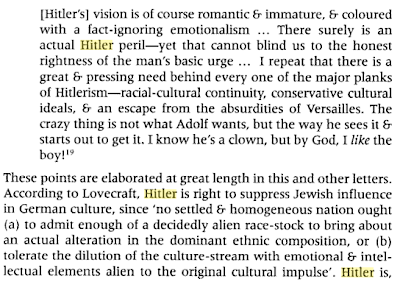 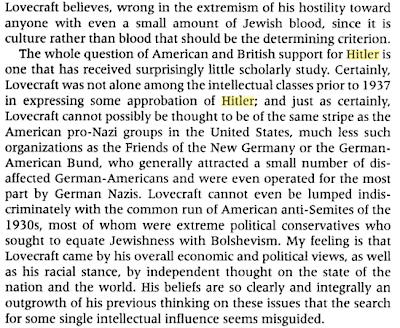 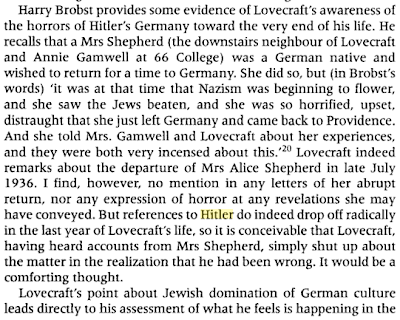 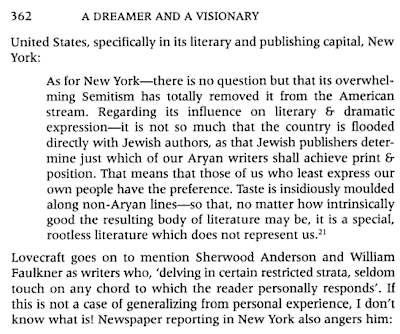 Etc. H.P. Lovecraft was a creepy exemplar of what Jonah Goldberg called “the fascist moment,” and his racialism and curdled nostalgia certainly pushes him towards sympathy with the Nazi fantasy-history ideology. I’m less inclined than Joshi to let him off, but if he did, in fact, back off from Hitlerism in the wake of the Nuremburg Laws, Kristallnacht, etc., then good for him, but he just moved over into “nice fascism” or socialism, so he didn’t end up anywhere desirable.

Lovecraft was a massive weirdo and crank, with repugnant racial views and an enthusiam for nasty, authoritarian politics. He was not all bad, of course, and in his letters one notes a profound kindness to young fans who wrote to him (like later Voice of America stalwart Willis Conover, whose Lovecraft At Last is just marvelous). Your Volgi likes a lot of his stuff, and he got to be a very good plotter and a decent stylist (though his early stuff is like bad Lovecraft parody). Even some of the stuff that comes from his evil, crazy racism is really very effective as a horror story. The miscegenated “degenerate stock” of Innsmouth have been breeding for decades with…undersea fish-men. That’s just good horror-movie material and a skin-crawling inversion of the mermaid myth.

Incidentally, the sole actual adaptation of his work for the big screen is of “The Shadow Over Innsmouth.” It’s called Dagon and is worth checking out.