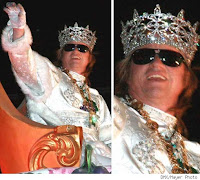 The key to discrediting a non-rationally held belief system is with equally a-rational emotions. Like ridicule. Laughter. Given that Globalwarmingism is effectively a cult impervious to evidence (no warming? Call it “climate change” and proceed without blinking), the Gormogons have to resort to other means to take it down.

In this instance, Val Kilmer, the Thirteenth Imam, (PB&JUH) has made a thinly-veiled nudie flick ostensibly aimed at Globalwarmingites which is so terrible that it disappoints its votaries. We can’t discuss the details, but let’s just say it’s an open question as to whether this movie was calibrated with an army of psychologists, GorT’s 22nd Century Subliminalitron, and the Mandarin’s extensive knowledge of hypnotism, in order to implant the emotion of doubt in Globalwarmingites. “Man, that movie sucked,” they will say, while their limbic system twitches and pre-verbally suggests, “Geez, this is all a crock.”

Is it working? You be the judge.