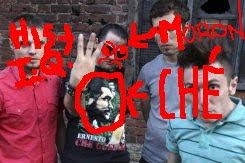 A perspicacious Gormogon operative writes in in re the Œc. Vol.’s endorsement of The Last Tanks in Paris:

Don’t get too excited about your rebellious Russian rockers. That’s a Che shirt on the second guy from the left. Seems like they’re only opposed to murderous thuggery in the specific, not the general.

Excellent point, sir. Confucius* says: Chagrined is the scholar who attends not to the footnotes.

That said, PTVP remains at the top of our Russian-acronymed-band list, at least until the Czar’s suit against us on behalf of t.A.T.u is adjudicated.