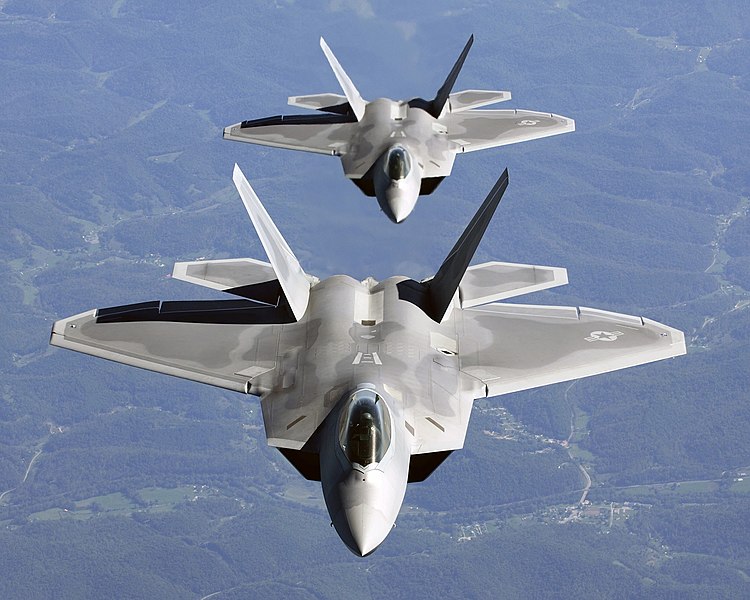 As you’ll recall, Confucius* says “Buy more F-22s.” This question is heating up increasingly, with Congress and many military officers on the one side, and Secdef Gates and the White House on the other.

Dodbuzz.com calls it A Battle for the Ages, not least because it will shape the strategy and structure of our military for decades to come.

Over at The American, Michael Austin writes very convincingly that DOD’s stated preference for 187 fighters actually translates in to many fewer available at any given time, especially during a conflict when they’re actually being used, shot at, stressed, etc. (It’s a very good piece. Read it in full.)

Emphasizing Austin’s point, Mike Goldfarb at the Standard got a senior Senate aide to describe the strategic danger of the number 187:

The key point on this issue is to me that 187 provides you with just enough for seven thinned-out squadrons that have no backup aircraft inventory or attrition reserve. BAI and AR are essential, given the eventuallity [sic, he likely means “inevitability” —ŒV] of crashes or combat losses in aircraft squadrons over the Raptor’s operational lifetime. This means that we have nowhere to go but down — either further thinning out our squadrons, or simply closing them. With barely enough aircraft to fill out the force, it will be difficult if not impossible to sustain it.

Over at the indispensible Aviation Leak, David Fulghum writes that the reports that the Pentagon is citing in justifying the low 187 number are suspect.

As cited in the dodbuzz link, Secretary Gates went out in Chicago and argued—primarily on the basis of budget numbers—that the F-22 was too expensive, and the F-35 will be better. To which Confucius says—nonsense. First of all, the draconian, zero-sum world that Secretary Gates describes is entirely a political construction. Why not raise the defense budget? The Secdef says, “If the Department of Defense can’t figure out a way to defend the United States on a budget of more than half a trillion dollars a year, then our problems are much bigger than anything that can be cured by buying a few more ships and planes.”

Please. We’ve added a ton of personnel and associated costs. We’ve actually been fighting wars, massively ramping up our maintenance, repair, and replacement costs for equipment. If at some point $500B—less than two thirds of the “stimulus” that President Obama now thinks may have been inadequately small—per annum was a legitimate ceiling, it seems like we’ve got plenty of reasons for thinking it no longer adequate. Even if it were a legitimate ceiling, it remains a budgetary requirement, not a needs-driven number. To emphasize the point, let me quote the Secdef:

The grim reality is that with regard to the budget we have entered a zero-sum game. Every defense dollar diverted to fund excess or unneeded capacity – whether for more F-22s or anything else – is a dollar that will be unavailable to take care of our people, to win the wars we are in, to deter potential adversaries, and to improve capabilities in areas where America is underinvested and potentially vulnerable. That is a risk I cannot accept and I will not take.

But why is it a zero-sum game? Because the President won’t raise defense spending, even as he heedlessly shovels truckloads of new money everywhere else.

This is politics, not military analysis. And it’s a highly ideologized politics to boot, as if you want to “save or create” jobs, defense manufacturing is a very easy place to do it, as simply ramping up orders to Boeing, Lockheed, FMC, Oshkosh Truck, et al., creates a need for more manufacturing workers and equipment (and the equipment either has to be bought new or maintained and replaced, both of which spread money to other manufacturers).

Most defense manufacturers are pretty efficient in terms of labor, but there’s no getting around the fact that it takes a lot of workers to actually put together a tank, plane, etc. So the Administration’s preference for pie-in-the-sky “green jobs,” UAW subsidies (called “GM” or “Chrysler”), and AFSCME government jobs in place of of actual, hands-on blue-collar jobs is at the root of Secretary Gates’s touching Sophie’s Choice. Would that he were able to say that.

We need more F-22s for the following reasons. First, we can’t know the strategic environment in ten or twenty years. We can guess. But history shows more often than not, you’re blindsided. Spend the money now, worry less later. Two, the F-22 is the type of system that our most likely opponents (Russia and China) can’t match easily. Eventually, sure, but they’ll have to divert a ton of money and time. That buys us a significant deterrent for the next decade or two. Third, we’re retiring a lot of planes, and we need to replace them with something. We have the F-22 in hand, and overall it seems like an excellent (if of course, not perfect) platform. Fourth, and of paramount concern in war-fighting, the F-22 all but guarantees air superiority which ensures that your lower, slower planes, helicopters, armor, and troops aren’t exposed to obliterating fire from above. When last the Œc. Vol. checked, the F-22 was something like 221-0 in exercises (or is it 221-1?) against our best pilots flying our best planes in imitation of the MiGs and Sukhois they’d face. This overwhelming superiority is not an advantage you want to set aside.

What about the F-35? It looks to be a really good plane, but although it’s not quite vaporware at this point, it’s still a work in progress.

No one can say when it’ll be in service. One hears 2015 is the earliest realistic date. It’s only just begun radar-cross-section testing (though a lot has been done in computers). Second, the F-35 is not primarily designed for air-superiority. As “J. Moses Browning” at NewMajority.com describes, it’s designed for the “Lo” role in the Air Force’s “Hi-Lo” strategy, and if his math and sources are right, it looks like we’ll need to spend as much money on extra F-35s to do the same job as we would just buying new F-22s (he cites a 10 F-35s : 6 F-22s ratio). Third, we know the Chinese have already walked off with some of its software. Last, there’s no guarantee that the F-35’s current price tag won’t balloon like most complicated military platforms. E.g., Pratt & Whitney’s F135 engine is late and over budget—about 40% ($2B!) over budget the last few years. (Coincidentally, the program office has taken engine cost out of its price estimate.) [Ares] And the DOD/White House are playing budget-politics hardball against the alternate engine GE and Rolls-Royce have been developing in case the F135 doesn’t end up working. Finally, F-35 costs are already artificially low—or rather the F-22’s is artificially high in comparison—because many of the F-35s systems were developed for the F-22 and the development costs are rolled into the F-22’s cost, but not the F-35’s.

And, come on. Sixty more F-22s (which was the last number the Air Force seemed comfortable with) comes it around $10B, maybe less. We we can’t afford that?! Even if you put all of the spending in one budgetary year, Secretary Gates’s sacred $500B budget goes up by, oh no, two percent. The horror, the horror!

As that number—and the Secretary’s words show—this entire fight is driven by the fact that the Administration has placed constraints on DOD that they’ve placed nowhere else in the government.

*For those who came in late: Confucius is the Gormogon’s Œcumenical Volgi.