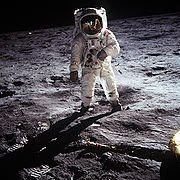 4:17 pm Eastern Daylight Time marks the 40th Anniversary of the Apollo 11 moon landing (Neil Armstrong didn’t step out onto the lunar surface for another several hours). It was the first human landing on the lunar surface. It concluded the ambitious goal laid out by John F. Kennedy’s famous speech to land a man on the moon and return him safely to Earth within the decade. It also began the end of the “Space Race” between the Soviets and Americans. Until shortly before this moment, the Soviets had been notching their belts with a number of firsts: first man-made satellite, first animal in space, first man in space, first man to orbit the Earth, etc. But the United States persisted and continued to pursue the challenge. The effort has generated a number of side benefits and increase human knowledge.

In an interview with a number of British scientists, one was quoted as saying,

“It was carried out in a technically brilliant way with risks taken … that would be inconceivable in the risk-averse world of today…The Apollo programme is arguably the greatest technical achievement of mankind to date…nothing since Apollo has come close [to] the excitement that was generated by those astronauts – Armstrong, Aldrin and the 10 others who followed them.”

They’ve captured my sentiment – we have become such a risk-averse world where we risk the ability to innovate and expand. Instead, we cling to the little we know and are increasing deferring critical and risky decisions to others, to government or to later in life.

Maybe NASA’s time is ending and private industry will eclipse it. Tom Wolfe, author of “The Right Stuff” (great movie and book about the Mercury program), captures some of this in an OpEd piece in the NY Times. So now, as we mark this anniversary, what has been accomplished in the 40 years since. Plenty of scientific advancement and monitoring in space, but very little in the way of expeditionary efforts. It will be interesting to see if the Orion program continues or falters as we move forward.

I look forward with the hope that I or my kids have the chance to witness that next “giant leap [of] mankind.”