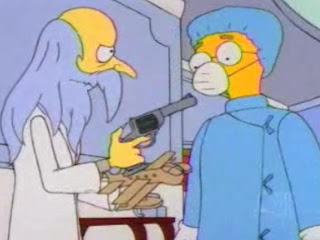 The real bubble is a consequence of big government. The more the citizenry expect from the state, the more our political class will depend on ever more swollen Gulf Emir-size retinues of staffers hovering at the elbow to steer you from one corner of the fishbowl to another 24/7. “Why are politicians so weird?” a reader asked me after the Sanford news conference. But the majority of people willing to live like this will be, almost by definition, deeply weird. So big government more or less guarantees rule by creeps and misfits. It’s just a question of how well they disguise it. Writing about Michael Jackson a few years ago, I suggested that today’s A-list celebs were the equivalent of Mad King Ludwig of Bavaria or the loopier Ottoman sultans, the ones it wasn’t safe to leave alone with sharp implements. But, as Christopher Hitchens says, politics is show business for ugly people. And a celebrified political culture will inevitably throw up its share of tatty karaoke versions of Britney and Jacko.

i seem to recall that this is also a problem among the very rich—your Doris Dukes, Ross Perots, Howard Hugheses, etc. Essentially, you’re so insulated from the world, your thought processes become disordered as they fail to bump up against the hard truths of life. Something like an induced psychosis, where you have progressively less reality testing.