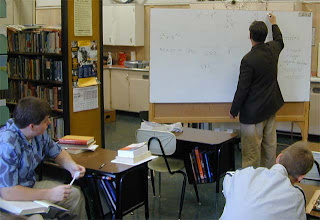 In some of my readings this week, I came across this paper (click for PDF). It’s 25 pages long, but thouroughly enjoyable – at least to me. I think many of his points ring true. Having been through the progression he outlines towards the end (at or about page 24) and farther (Calculus, Statistics for Math majors, Differential Equations, etc.), I can attest to some of the oddities that the author presents with wit.

To this day, I enjoy math problems (particularly geometry, so the author’s geometry bent tugs at me) – I still do them at my whiteboard in the office (although, recently, it’s been spherical trigonometry which is a bit more complex). My daughter is reading a mystery book where the Fibonacci series (or numbers) plays a role. I spent 15 minutes talking to her about a summer camp I went to right before high school where I learned about the Fibonacci series, the Golden ratio, Franz Liszt and snails in a single lecture. That’s probably safer to leave for a future post. Needless to say, we are likely not teaching math (and science) in such a way that enthralls or excites children. These subjects have largely become rote and boring and lead students to spend more time deciding what artwork they can decorate their Lewis diagrams with rather than enjoy the subject matter. Maybe the educational system is ready for a shake up?